Essay
Joining the artist group "Brücke" in 1906 was the beginning of a new artistic era for Hermann Max Pechstein in which alternative lifestyle concepts and efforts for more social reforms would exert strong influence on his generation. Working together with Erich Heckel, Ernst Ludwig Kirchner and Karl Schmidt-Rottluff inspired the artist at a point in his life when he was still studying in Dresden. Upon completion of his studies Pechstein was awarded the Saxonian State Prize (Rome Prize) for painting. In autumn 1907 he visited Italy on a scholarship, in December he went to Paris, where he would stay until September 1908. In Paris Pechstein became familiar with latest art tendencies, he discovered the style of the "Fauves" and met Kees van Dongen. Pechstein was able to convince him to join the "Brücke" and to become a member of the Dresden movement. Van Dongen’s "baroque" style and his boisterous and powerful treatment of colors strongly impressed Pechstein, as they matched his perception of painting. Additionally, the young and hungry artist probably soaked up the Paris nightlife, with its ballet- and dance performances. After his return to Berlin the participation in two exhibitions of the Secession in 1908 and 1909 strengthened his position in the local art scene. Through the exchange with other members of the "Brücke", for instance in context of plein-air sessions at the Moritzburg Lakes near Dresden, his personal style developed decisively and Pechstein gained confidence in finding more extreme motifs.
Pechstein stayed in Berlin, he was fascinated by the world of variety shows and the theater, found inspiration in dance and ballet performances he saw at cafes and dance halls, caught fancy for the exotic figures, dancers and actors of the demimonde and the excessive and uninhibited life they lived. In 1909/10 he made his rare oil paintings of a dancing couple (Tänzerpaar 1909/51, Russisches Ballett 1909/50, Tanz 1909/49). In our painting "Tänzer" from 1910 Pechstein succeeds in capturing the tension of the dancers’ bodies and their rhythmical motion on canvas. The observer virtually feels the throbbing music and the erotic atmosphere that the dance scene emanates with its ecstasy of pink and blue colors in the background. What kind of event might have inspired Pechstein to such a great and liberated composition? We don’ know for sure, but the painting also captivated Felix Hollaender, who acquired "Tänzer" the very same year. As writer, critic, dramaturge and director – among others under Max Reinhardt at the DeutschesTheater – he was quite familiar with the world of dance. After his death in 1931 the painting remained in his family. In 1957 the dance scene changed owners and became part of a Swiss private collection, where it would remain up until today. Dance becomes a "symbol of all of Pechstein’s art", says the Berlin art historian and critic Max Osborn, a school friend of Felix Hollaender, in his comprehensive Pechstein monograph that was published in Berlin in 1922. [MvL]
Plus d'informations
+
Vendre
vous souhaitez vendre un objet similaire?
+
Enregistrement sur
Hermann Max Pechstein
+
Questions sur l´achat
+
Contacter l'expert
110
Hermann Max Pechstein
Tänzer, 1910.
Oil on canvas
Estimation:
€ 600,000 / $ 684,000
Résultat:
€ 1,250,000 / $ 1.424.999
(25% frais d'adjudication compris)
Plus d'informations
+
Vendre
vous souhaitez vendre un objet similaire?
+
Enregistrement sur
Hermann Max Pechstein
+
Questions sur l´achat
+
Contacter l'expert
Autres images 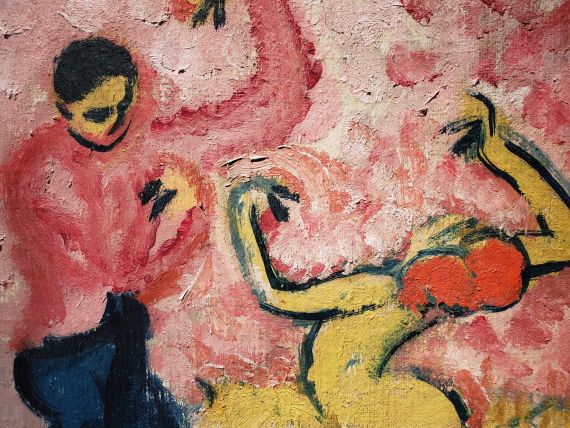 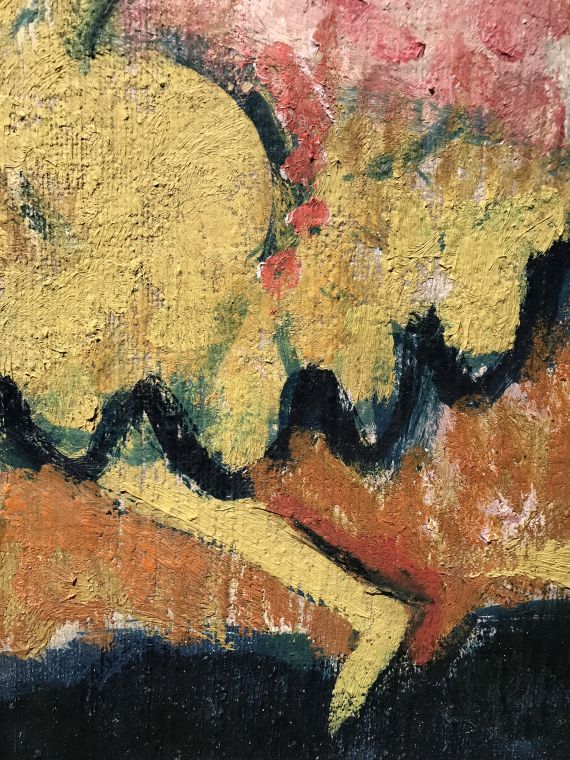