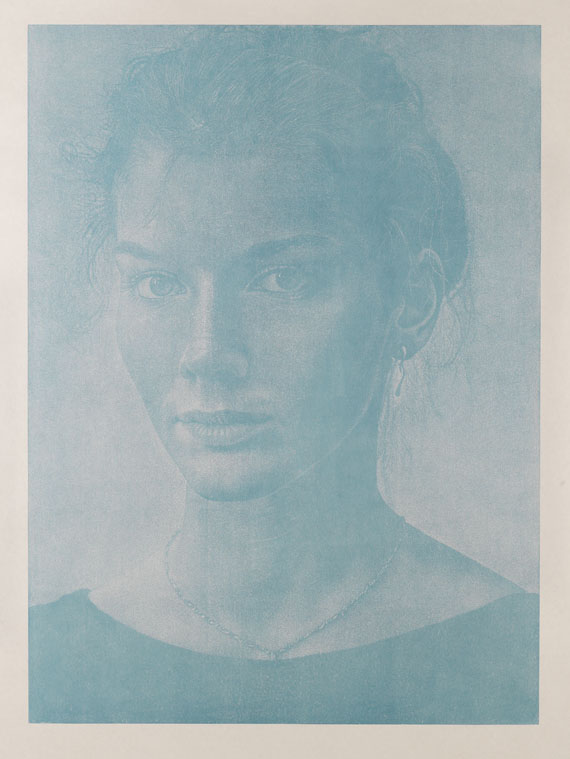 Franz Gertsch was born in Möringen in the Swiss canton Bern in 1930. From 1947 to 1950 he attended the painting school of Max von Mühlenen in Bern. At this time he made first woodcuts. In the following he studied with Hans von Schwarzbach in Bern. Early paintings are characterized a strong stylization and broadly applied colors. Around 1970 he turned to photo-realistic painting, which he showed on Documenta 5 in Kassel in 1972, and contributed a lithograph to the accompanying portfolio. In 1974/75 Gertsch lived in Berlin for some time, in 1978 he participated in the Biennale in Venice. In 1980 the Kunsthaus Zürich showed a grand exhibition of his oeuvre.

The artist’s large woodcut is nothing less than unique, being a continuation of the photo-realistic female portraits in oil made as of 1986, he first made portraits, but as of 1988/89 also landscapes. Just as it is the case with his paintings, Gertsch sets highest value on pure materials, often even making the colors himself from minerals. ”I am always asked how I got from painting to woodcuts, and all I can say is that when making the last [oil-] picture of 'Johanna', I was thinking: 'I want to make woodcuts.' With many my works I decided to take on the challenge of using the seemingly most unsuitable medium. There is nothing more unsuitable than a woodcut [..] to implement three-dimensionality. […] One day I just took the gouge and started cutting the dots. The first woodcut still had some lines, but I gave them up on the second. […] The first woodcut portraits [with three printing plates] were not monochrome, I felt I still needed minimal coloring. […] It was an important step to use just on plate, just one helio drawing. The light was only recessed paper. The image emerges from the clear balance between the color and the paper. [The second woodcut portrait] 'Dominique' is of great importance to me, as here the landscape concept of the portrait, the pure idea of the woodcut and the integration into a monochrome color space fall together for the first time.“ (Franz Gertsch, in: ex. cat. Baden-Baden et al 1994/95, pp.14f.) The portrait "Doris", which is also offered in this auction, was also made from just one plate.

In 1997 Franz Gertsch was awarded the "Kaiserring", the art prize of the city of Goslar. He also participated in further Biennale shows in Venice in 1999 and 2003. In 2002 the Museum Franz Gertsch opened in Burgdorf, canton Bern. On occasion of his 75\up5 th birthday a Franz-Gertsch retrospective took place in the Kunsthaus Bern in 2005. Since 2006 Gertsch has been honorary citizen of his residential parish Rüschegg. [CB].