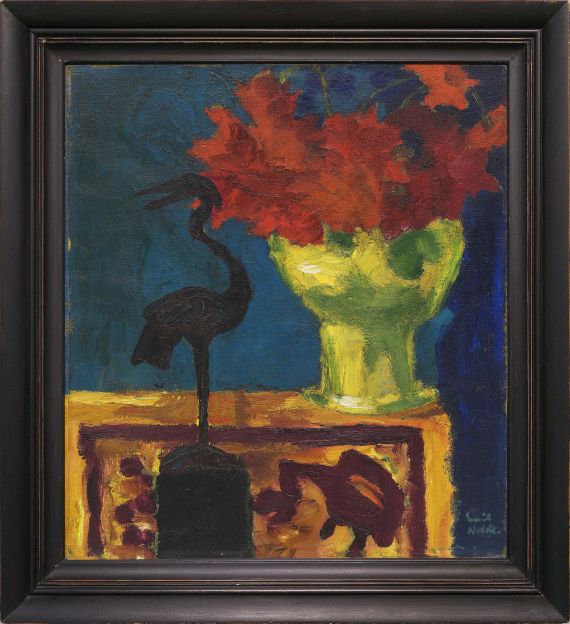 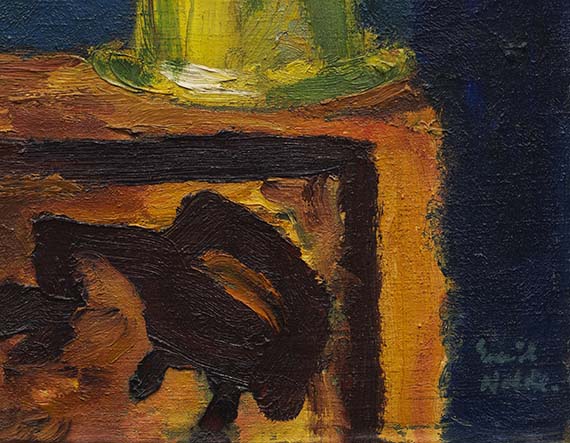 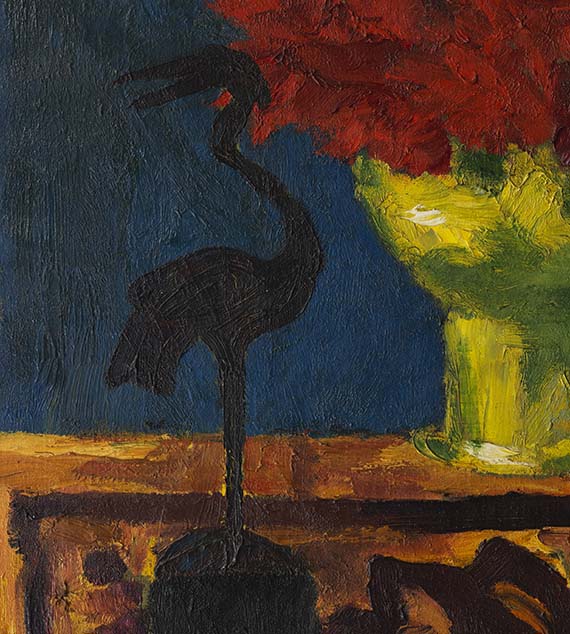 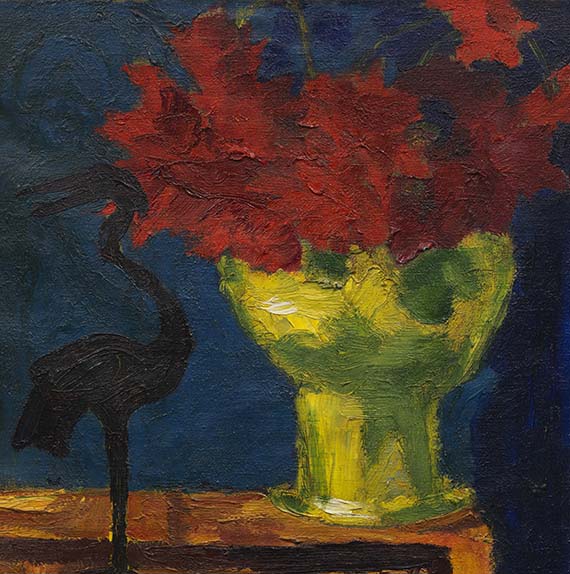 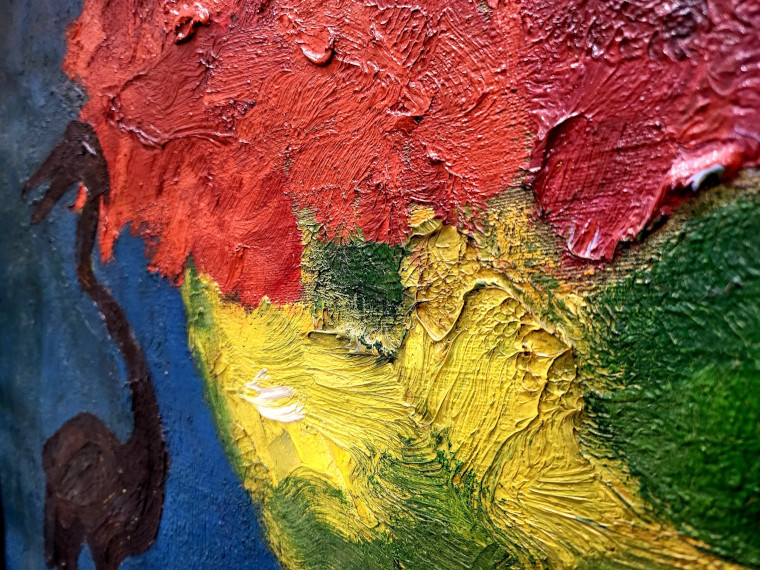 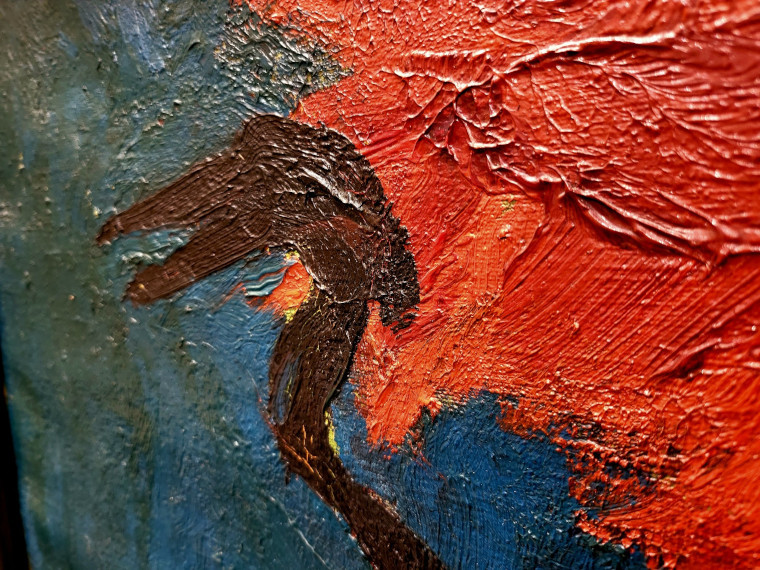 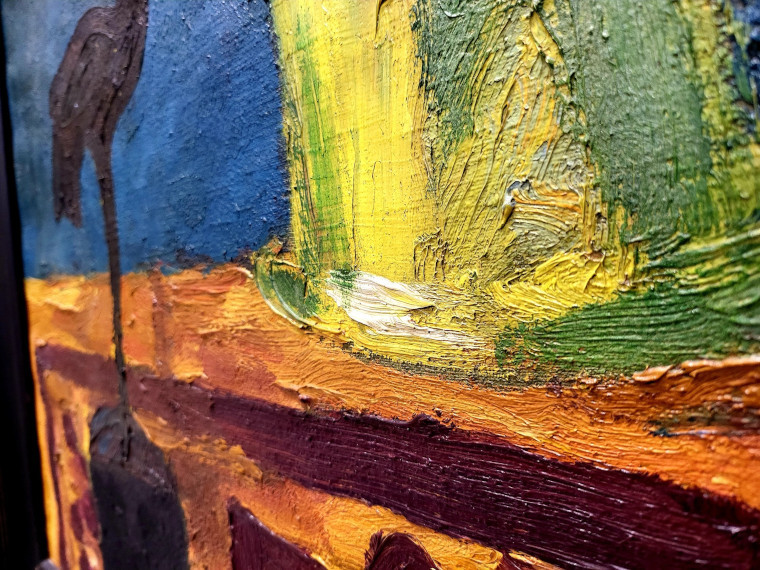 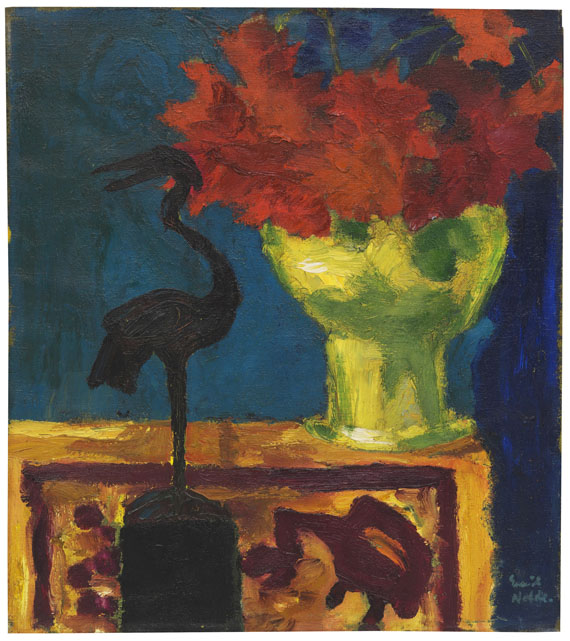 The accomplished still life
Emil Nolde's still life paintings are accompanied by mysterious and silent arrangements that have a somewhat remote appeal and which he equips with various objects that he formulates as a bigger whole. It is his clear view and his filigree method with which he shows details of various items from his everyday life. He chooses objects that he brings together in ever new artistic constellations. Parallel to the visits to the Museum of Ethnology since around 1909, Nolde begins to compile his own pool of objects for his still lifes, which not only enrich them, but which also document the close relationship the artist has with them, as he sees the objects in relationship to his image of man, accordingly, he carves them out with great care and treats them as equals. The observer senses Nolde's interest in their origins and incidentally learns something about their cultural function, about which he artist knows to report in colorful constellations. The topos of transience as part of the long tradition of still life painting is no longer evident in Nolde's work, unless the splendor of the flowers, the bright red georgines in our picture, is forced into a vanitas symbolism. Naturally, cut flowers in particular are examples of perishability. Nolde painted “Vogel und Georginen” in 1919. Before and afterwards the artist painted other still lifes, one could speak of a series in which Nolde dealt with the interplay of things and accordingly arrived at different results: In “Maske und Blumen“ (Mask and Flowers)” Nolde staged a Japanese mask from his collection in a sea of carnation-like flowers; In the picture “Figuren und Georginen” Nolde presents a standing female figure, presumably of Chinese origin, and a stone sculpture, perhaps from the Neolithic Age. While the georgines have not yet fully blossomed there, they, standing side by side with the long-legged, heron-like bird with a distinctly long neck and dagger-like beak, unfold a lush display of flowers in this work. The bird is made of bronze and is believed to be of Persian origin and stands on a cloth that Nolde's wife Ada had woven after the artist's motifs.
The exotic – Emil Nolde and the art of primitive people
Over the years Nolde had amassed an extensive collection of curious figures, masks and the like. His interest in the extraordinary, in contrasts, in the primal, the primitive and the narrative of the artefacts that he had brought back from his trips or that he accidentally discovered in antique shops, enriched, along with the flowers from his own garden, the artist's still life paintings. “The collection contains the most contradicting things: Colorfully glazed English earthenware figures, the kind sailors bring back home from their voyages, could mean as much to him as a precious Chinese seaweed horse or an Etruscan clay figure. The large painted Uli's from New Guinea, bronzes and porcelain figures from China, Korea and Java, masks, African, Egyptian, Indian, pre-Columbian, medieval and folk art from his home in Northern Schleswig - Nolde always had these things around him. They were all over the house in Seebüll and in the Berlin apartment, complementing his pictures and the figures he had made himself. They lived with him, were part of his world and were part of the painter's experience ”, says the long-time director of the Ada and Emil Nolde Foundation, Martin Urban. (Cat. ex .: Emil Nolde. Masken und Figuren, Bielefeld 1971, no. p.)
A peek into the private life
Emil Nolde‘s “Vogel und Georginen“ is one of the mature and balanced still lifes made during a period of transition in the 1920s. The fiery red georgines come from the garden in Utenwarf and Ada (presumably) arranged them in a bright yellow glazed vase that Emil had made. The bronze comes from his collection; and Nolde effectfully stages it in a silhouette-like black, thus connecting the here and now with the woven figurine on the cloth. There is not even the slightest notion of oddness in the encounter of these things, on contrary: the artist integrates the things into a splendid everyday life, his everyday life in the studio. [MvL / SM]
Plus d'informations
+
Possibilités déenchère
+
Enchère par téléphone / Enchère écrite
+
Contacter l'expert
+
Questions sur l´achat
+
Pré-visites et déroulement de la vente
+
Commander le catalogue
+
Enregistrement sur
Emil Nolde
+
Vendre
vous souhaitez vendre un objet similaire?
250
Emil Nolde
Vogel und Georginen, 1919.
Oil on canvas
Estimation: € 400,000 / $ 464,000
Plus d'informations
+
Possibilités déenchère
+
Enchère par téléphone / Enchère écrite
+
Contacter l'expert
+
Questions sur l´achat
+
Pré-visites et déroulement de la vente
+
Commander le catalogue
+
Enregistrement sur
Emil Nolde
+
Vendre
vous souhaitez vendre un objet similaire?
Objets similaires sur le marchÃ© international de l'art 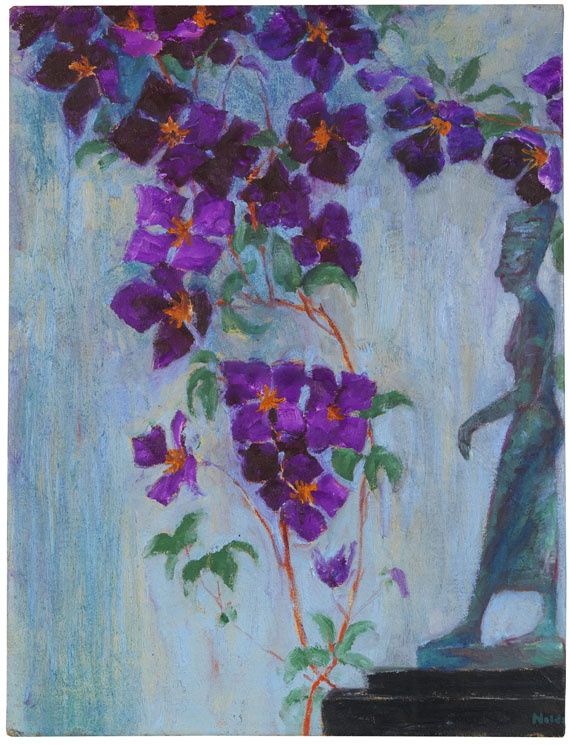