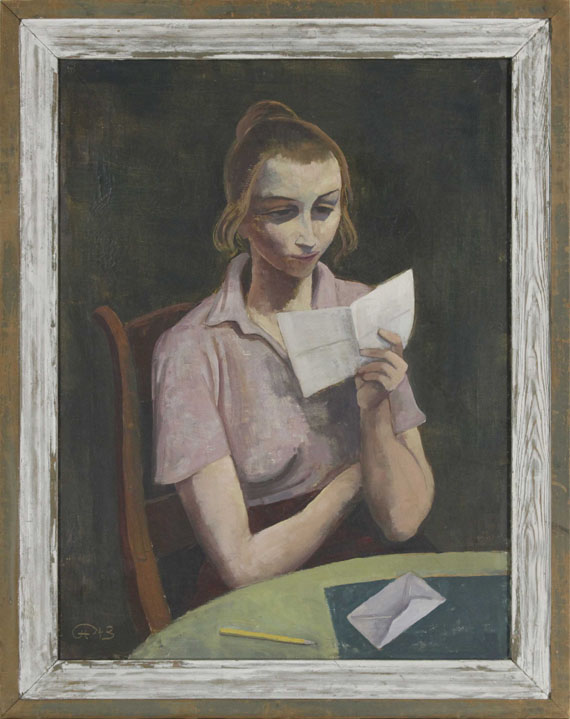 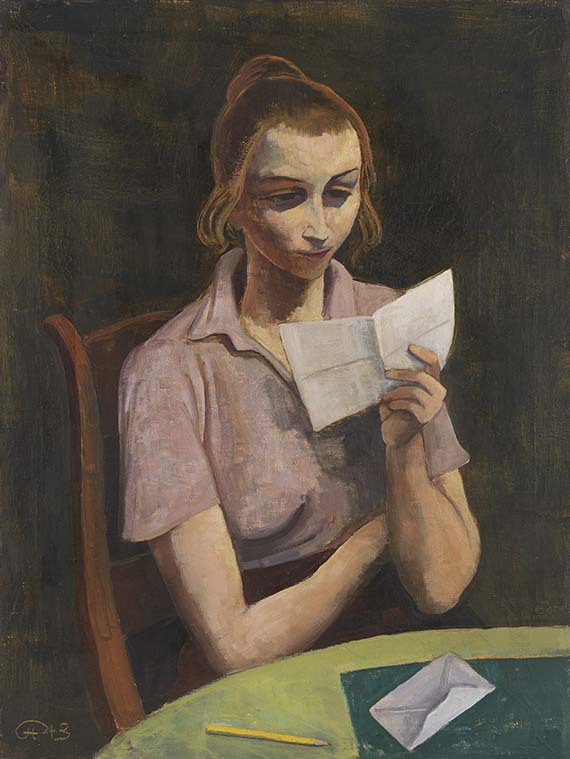 • Intimate, private scene of a girl reading a letter, a rare motif Karl Hofer's oeuvre.
• Exhibited during the artist's lifetime as early as in 1945.
• Impressive exhibition history covering some 50 years.
• Part of the same German private collection for more than 40 years and for the first time offered on the auction market.

PROVENANCE: From the artist's estate (estate no. 429 (numbered on a label on the stretcher), Wirnitzer list no. 298).
Baukunst-Galerie, Cologne (with a typographically inscribed gallery label on the reverse).
Private collection North Rhine-Westphalia.
Ever since family-owned.

The year our work was created is considered a very fateful year in the life of Karl Hofer. During the first major air raid on Berlin on March 1st, a fire destroyed his studio and most of the works he had stored there. In the following months, the mature, experienced artist seemed to paint against his fate with an unbelievable energy and impressive creative urge: against the injustices he had to suffer, the defamation and ostracism by the National Socialists, his suspension, and against the helplessness in the light of the destruction of his work.
While the motif of the predominantly female figure, mostly reading a book or newspaper, is found more frequently in the artist's oeuvre, the depiction of the reader immersed in a letter is a rare occurrence. The same year he took up the motif again in "Brieflesendes Mädchen" (Kunstmuseum Stuttgart), which shows a young woman pensively gazing into space. In our picture the young lady takes a more serious look at the letter - perhaps a piece of military mail - an envelope that has just been opened and a waiting pencil make for an extraordinarily intimate narrative level with a noticeably emotional pictorial effect. In other portraits this is often overshadowed by the reverie and melancholy, in this work, however, it once again visualizes the wealth of ideas and the extraordinary painterly skills the master of the figure portrait possessed. [CH]
Plus d'informations
+
Vendre
vous souhaitez vendre un objet similaire?
+
Enregistrement sur
Karl Hofer
+
Questions sur l´achat
+
Contacter l'expert
231
Karl Hofer
Lesende Frau, 1943.
Oil on canvas
Estimation:
€ 80,000 / $ 90,400
RÃ©sultat:
€ 125,000 / $ 141.250
( frais d'adjudication compris)
Plus d'informations
+
Vendre
vous souhaitez vendre un objet similaire?
+
Enregistrement sur
Karl Hofer
+
Questions sur l´achat
+
Contacter l'expert
Offres sur Karl Hofer
+
toutes les offres
Ce qui pourrait encore vous intÃ©resser
+
toutes les offres
Karl Hofer - Objets vendus
+
toutes les offres