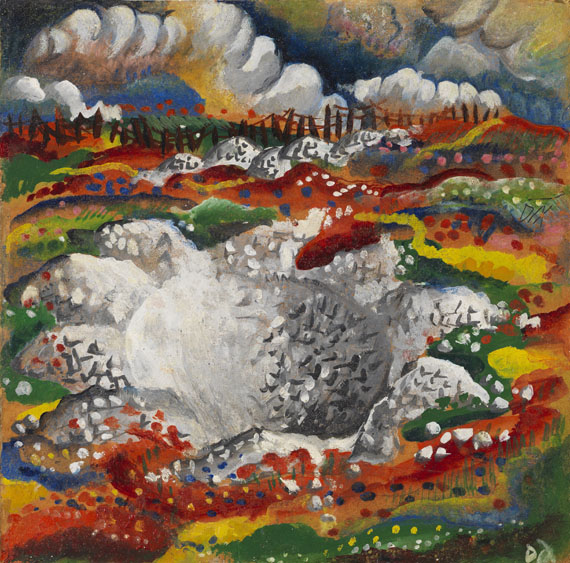 • Bizarre colorful war landscape with debris, bomb craters and trenches
• One of five paintings with the theme of war and soldiers' lives
• Dix documenting Modernism: a chronology from expressionistically distorted forms to an abstract apocalyptic vision
• Paintings made during World War I are extremely rare on the auction market.

Essay
An old bomb crater framed by flowers, barbed wire cladding in the background, the sunny sky is hiding behind gray-white clouds caused by an explosion. The event "war" has slowly passed over this scene, eating itself further into the country, leaving deep scars, bomb craters all over the place, while nature is takes back what has been destroyed, what has been taken. Otto Dix minutes the natural phenomenon war , bathes it in bright colors, the earth blossoming in green, yellow and red, covering the agonies of the soldiers who fight each other inch by inch, back and forth. Dix analyzes the expressiveness of the event ‘war‘ and shows the observer his critical view of the veracity that World War I caused between Germany and France. Like here, Dix documents a legacy, the landscape as a mistreated and abused piece of earth. And yet it is in bloom. Otto Dix was there right from the start; he volunteered in 1914 and, like so many intellectual contemporaries, saw war as a symbol of the new beginning, Futurism in the making. Dix coped with his personal experiences of war, the horrors of death, the victims of the civilian population and the cruelty of the brutalized soldiers through creating numerous pencil-, chalk- and charcoal drawings, which he executed right in the trenches on the front and which culminated in his graphic main work, the cycle "Der Krieg" (The War, 1924) comprising 50 etchings delivering an even more brutal, direct and relentless account of the atrocities. His war pictures document human dynamics, tremendous exertion and horrific progress. "Lice, rats, wire entanglement, fleas, grenades, bombs, caves, corpses, blood, schnaps, mice, cats, gases, cannons, dirt, bullets, mortars, fire, steel, that's the war! It‘s al the work of the devil!" Noted Dix in his diary in 1915 and 1916 (Otto Dix, Kriegstagebuch, 1915/1916, Städtische Galerie Albstadt, Sammlung Walther Groz). Dix was drafted as reservist in August 1914 and was trained on the heavy machine gun. In September 1915, he volunteered to go to the front. From November 1915 to December 1916 his theaters of war were the Champagne, Artois with trench warfare in the French part of Flanders, on the banks of the river Somme, site of two major battles occurred. In 1916 he received the Iron Cross II class. From 1917 Dix was deployed on the eastern Front. In 1918 he was promoted to the rank of a sergeant after he had been wounded. Between 1915 and 1918 he created 46 field postcards, a chronicle of the events in short, concise, but haunting sketches. “Often enough people were condemned to dully persevere in dugouts and underground tunnels in. One must have seen the inhuman to believe", said the artist years later. Otto Dix is one of the few German artists who experienced World War I at the very frontline from 1915 to December 1918, explaining his self-conception as follows: "The artist: One who has the courage to say yes." With pencil, black chalk, ink, watercolor and gouache the artist documents modernity, a chronology from the expressionistic distortion of form over cubo-futurist decomposition to an abstract vision of the apocalypse, on knapsack-sized brown paper sheets. Löffler and Pfäffle's catalog raisonné lists around 500 drawings and 86 gouaches, but only five paintings, including this view of the aftermath of war exaggerated in the bizarre, colorful aesthetic of a landscape of rubble, craters and ditches near Reims in the spring of 1916. [MvL]
Plus d'informations
+
Vendre
vous souhaitez vendre un objet similaire?
+
Enregistrement sur
Otto Dix
+
Pré-visites et déroulement de la vente
+
Possibilités déenchère
+
Enchère par téléphone / Enchère écrite
+
Questions sur l´achat
+
Commander le catalogue
+
Contacter l'expert
211
Otto Dix
Granattrichter, Um 1916.
Oil over pencil
Estimation: € 140,000 / $ 159,600
Plus d'informations
+
Vendre
vous souhaitez vendre un objet similaire?
+
Enregistrement sur
Otto Dix
+
Pré-visites et déroulement de la vente
+
Possibilités déenchère
+
Enchère par téléphone / Enchère écrite
+
Questions sur l´achat
+
Commander le catalogue
+
Contacter l'expert
Autres images 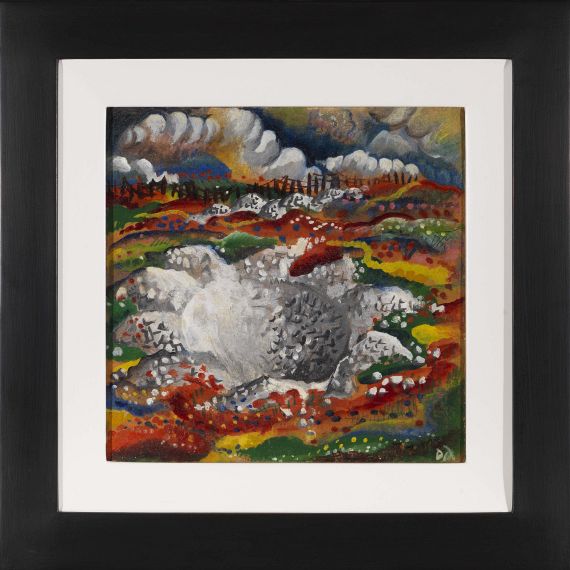 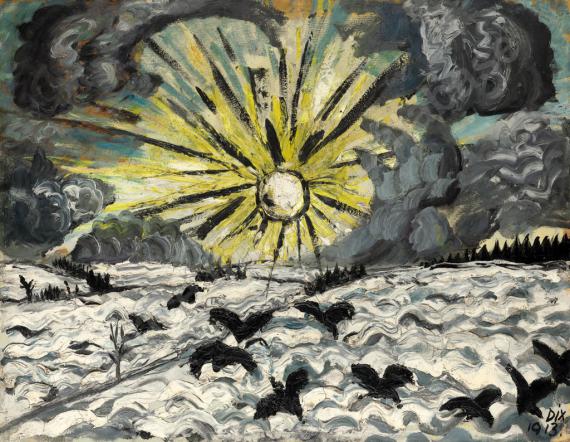 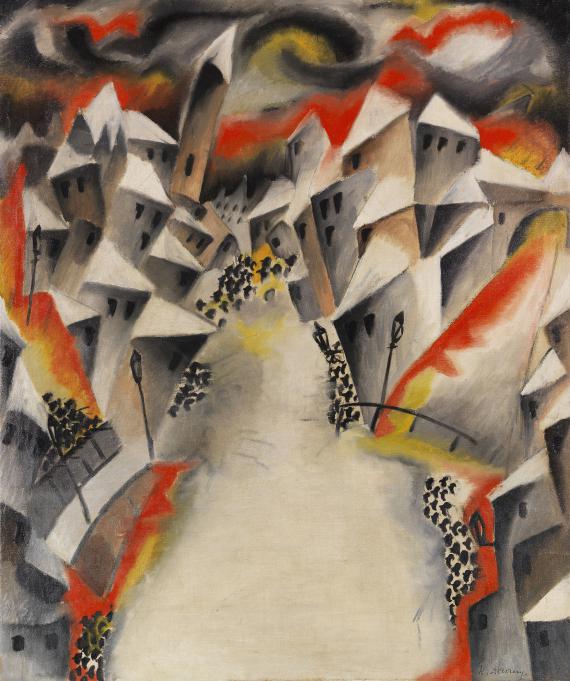