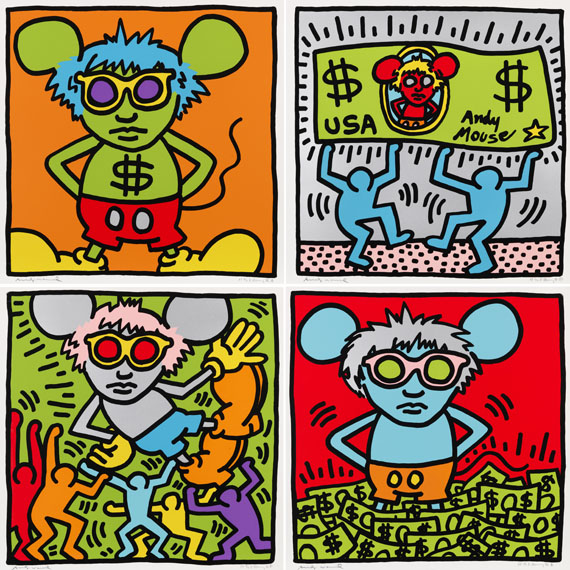 PROVENANCE: Galerie Littmann, Basel.
Private collection Lower Saxony (since 1994, acquired from the above).

The series "Andy Mouse", comprising four color silkscreens, is one of the most sought-after editions in Haring's oeuvre and is dedicated to his friend and mentor Andy Warhol. This characteristically playful series is a testament to the relationship between Keith Haring and Andy Warhol, the undisputed father of pop art. Warhol's influence on Haring was tremendous, he said: "You see, whatever I've done would not have been possible without Andy. Had Andy not broken the concept of what art is supposed to be, I just wouldn't have been able to exist. " (Keith Haring, quoted from: John Gruen, Keith Haring: The Authorized Biography, 1991, p. 169). Printed in seven colors - black, gray, green, blue, yellow, red, pink and orange – and released in an edition of 30 plus 10 artist proofs, the "Andy Mouse" series is significant both in terms of its formal quality and its theme. Although Haring was experimenting with printing techniques such as lithography as early as in the late 1970s, it wasn't until 1983 that he started making screen prints. This technique, adopted from the world of commercial printing, enabled him to print multiple images in vivid colors without any loss of quality. Haring undoubtedly took this step in part also because Warhol had already established the medium. Haring soon showed the same passion for printmaking as for painting and he began to work with publishers in the USA, Switzerland, Japan, Germany, France, Denmark and Holland, producing more and more imaginative and more daring work. Here Haring found the perfect medium to unite his tendencies in graffiti art, pop art and comics in a strongly reduced style with black contours and bright colors. During this time he developed the dog-like animal as his "tag", his trademark, which became an integral part of his iconography. In a similar way, a whole vocabulary of reduced figurative signs emerged, which subsequently inhabited Keith Haring's image world. Keith Haring's works reflect life in New York and capture important moments in pop culture. 1982 marked the first peak of his career. The Tony Shafrazi Gallery in New York showed his first major solo exhibition, which was completely sold out. This was also where Keith Haring met Andy Warhol. Both artists shared a great admiration for Walt Disney. In this context it is little surprising that Haring adapted one of the most famous cartoon characters in the world, Mickey Mouse, and combined it with characteristic attributes such as Andy Warhol's messy hair and glasses to create a monument of these two icons. The result is an homage from one artist to the other in the typical imagery of Pop Art. The dollar sign, another striking element of the Pop Art alphabet, is emblazoned on the chest. The typical Haring men dance and celebrate and carry Andy Mouse on their hands. Haring conbines symbols that are part of American culture - Mickey Mouse, the dollar sign and Andy Warhol - with his inimitable style and makes this print itself an icon of pop art. [SM]
Plus d'informations
+
Vendre
vous souhaitez vendre un objet similaire?
+
Enregistrement sur
Keith Haring
+
Questions sur l´achat
+
Contacter l'expert
388
Keith Haring
Andy Mouse (4 Blatt), 1986.
Silkscreen in colors
Estimation:
€ 300,000 / $ 348,000
RÃ©sultat:
€ 1,037,500 / $ 1.203.500
(25% frais d'adjudication compris)
Plus d'informations
+
Vendre
vous souhaitez vendre un objet similaire?
+
Enregistrement sur
Keith Haring
+
Questions sur l´achat
+
Contacter l'expert
Ce qui pourrait encore vous intÃ©resser
+
toutes les offres
Keith Haring - Objets vendus
+
toutes les offres