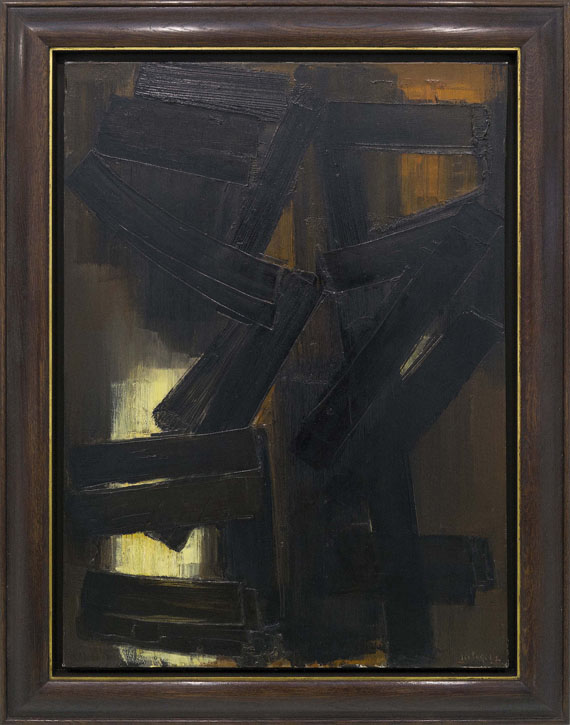 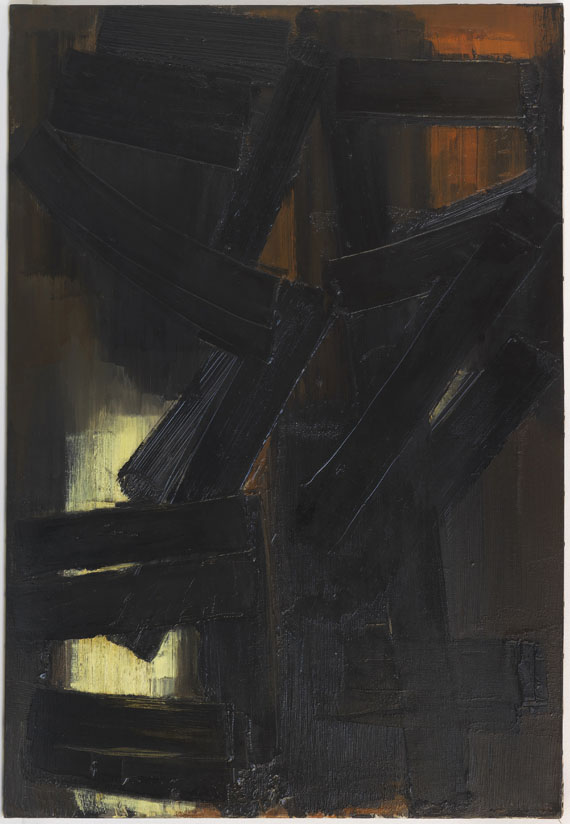 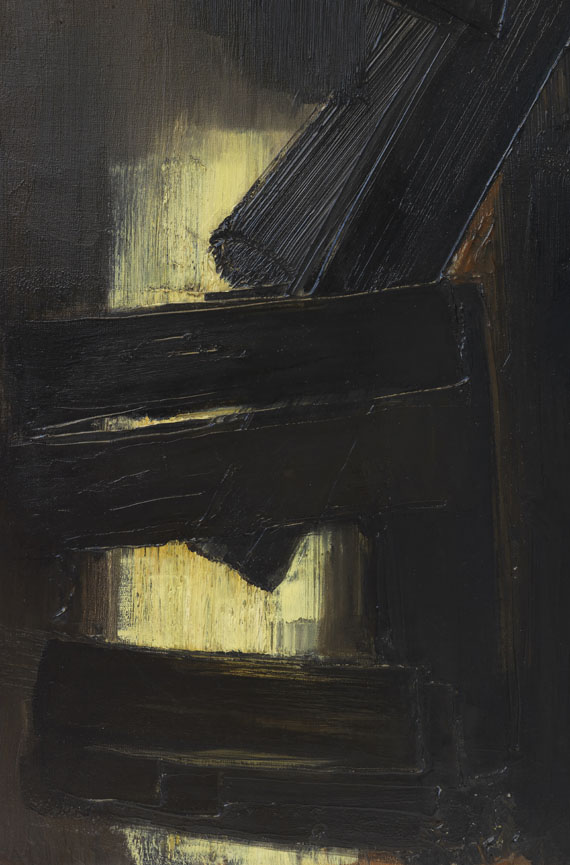 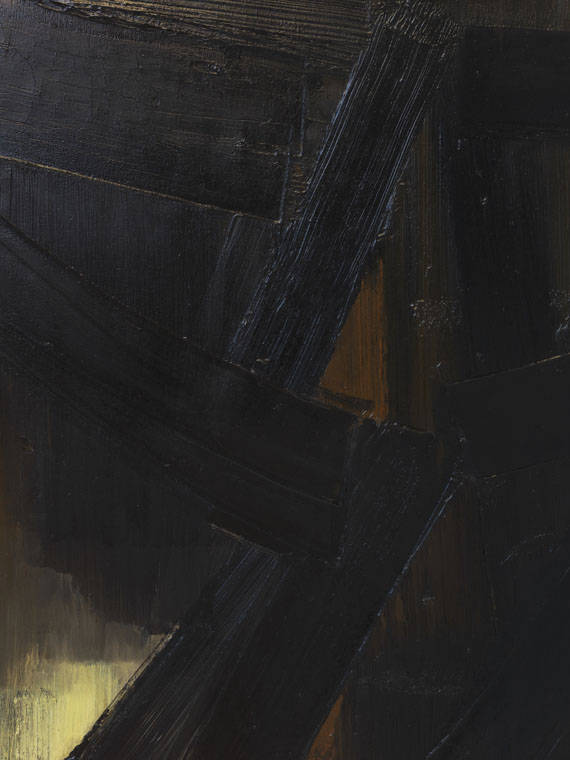 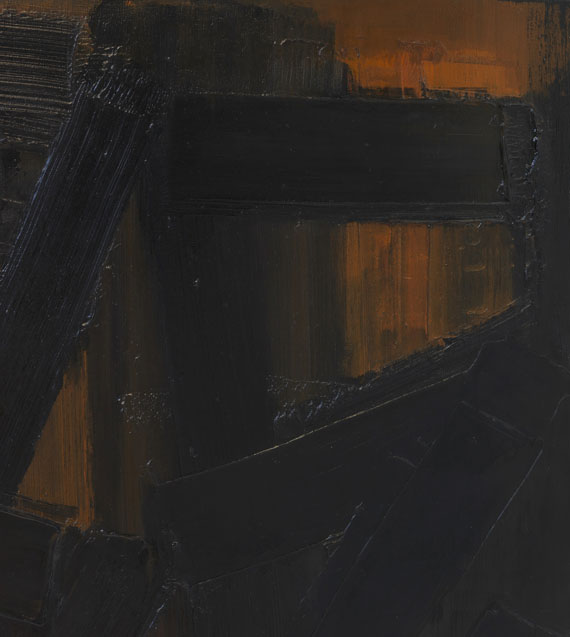 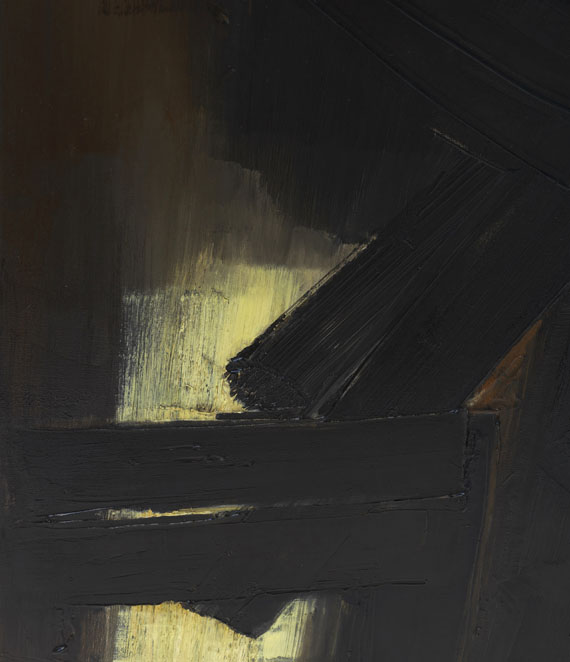 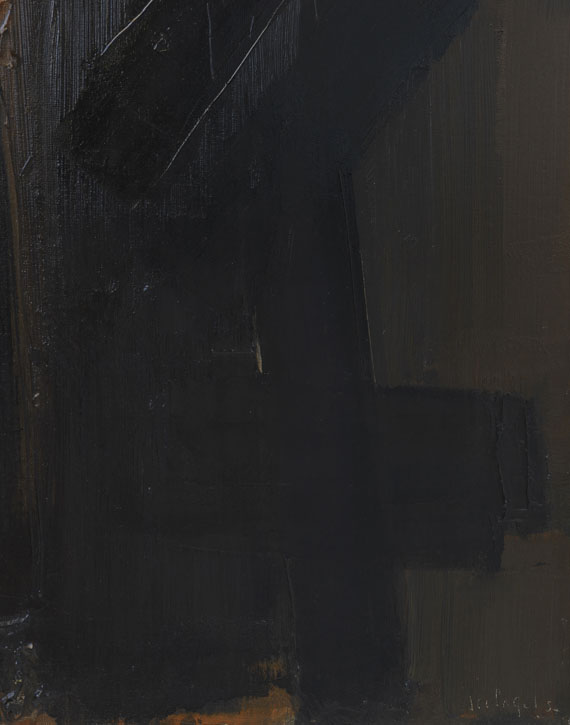 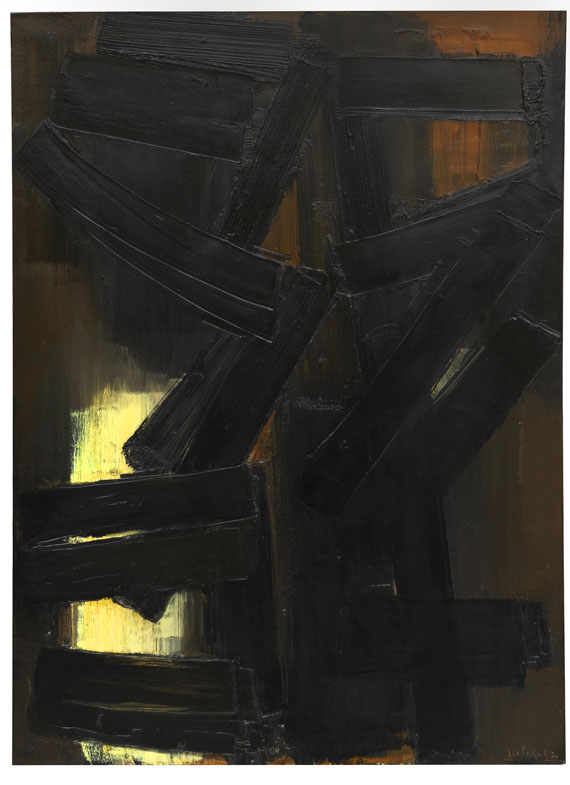 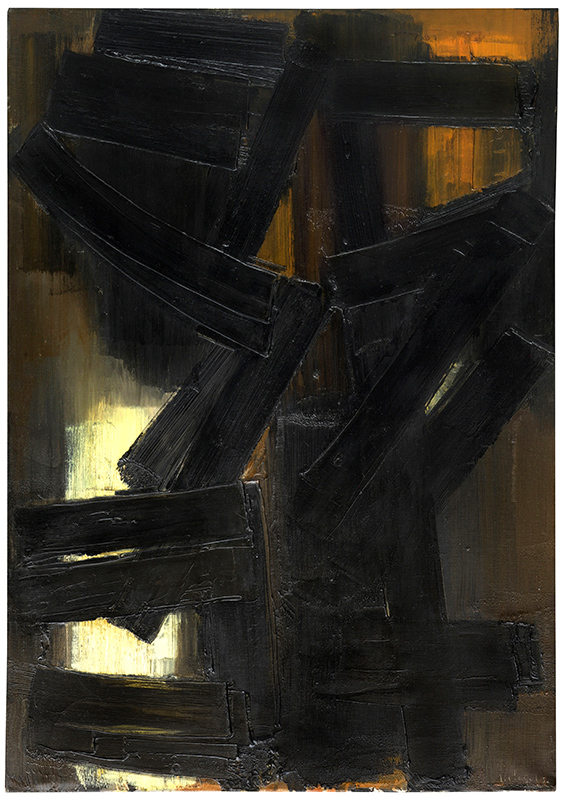 • Part of the same German private collection ever since it was sold through Galerie Otto Stangl in Munich in 1954.
• Outstanding powerful composition from the early seminal years of creation during which Soulages attained his unmistakbale style.
• Soulages' abstract painting from around the middle of the century played a pioneering role for European Informalism and American Action-Painting.
• The artist participated in documenta I, II and III in 1955, 1959 and 1964.
• Comparable compositions from the 1950s are part of acclaimed international collections like the Solomon R. Guggenheim Museums, New York, the National Gallery of Art, Washington, DC, Londoner Tate, the Centre Pompidou, Paris, and the Folkwang Museums, Essen.

PROVENANCE: Galerie Otto Stangl, Munich (with a typographically inscribed gallery label on the stretcher).
Private collection Germany (acquired from the above in 1954).
Ever since family-owned.

"To me as observer it does not matter according to which formula Giotto, Cézanne or Van Gogh organize space; what moves me is to see how they engaged in an entirely human experience, how space or any other element inseparably linked with their painting is based on their poetry, their style, and how all of this is witness to their and our personhood, how it fascinates us and becomes a part of us when we see and love their pictures."
Pierre Soulages, L’espace dans la peinture, 1953, translated from: Pierre Encrevé, Soulages, L'œuvre complet 1946-1959.

The painting of Pierre Soulages is characterized by an immediate sensation. Its expression depends on the manipulation of the coarse pigments, which cast mysterious reflections reminiscent of Rembrandt's semi-luminous light. These effects deepen and enrich his stacked crosses, double crosses and zigzag lines made of black oil paint, which give his art a strong emotional quality in which a relationship to the great art of the past shows. The freedom and dramatic appeal of his arrangements, however, have something existential about them; it is characterized by rudimentary but eloquent ciphers. Soulages transfers the Abstract Expressionism of Franz Kline or Robert Rauschenberg into a new language and gives it a new atmosphere.

Black as a color
After the Second World War, European artists like Pierre Soulages, and artists from New York discovered the color black. From a European point of view, they purify the colorful and naturalistic paths of the recent past and reflect on the origin of our existence from the dark black. "Black", according to the English author and art critic David Sylvester, "was a sacred color for the Abstract Expressionists, it was their lapis lazuli; they surrounded it with a mythical nimbus, partly because of its austerity, partly because there was something macho about it if one managed to get a decent, strong black."
As early as in 1895, Edmond de Goncourts differentiated the effect of black in his essay on the Japanese painter and wood cutter Hokusai: "A black that is old and a black that is fresh. Shiny (brilliant) black and matt black, black in the sunlight and black in the shade. An admixture of blue must be used for the old black, an admixture of white for the matt black; glue (colle) must be added for the glossy black. Black in sunlight must have gray reflections."
The visual experience of black has changed significantly in modern times since Goethe's theory of colors (colors between white and black can be composed of colors) and Klee's nuanced color theories ("Every color begins out of nothing"). The use of pure black as an autonomous gesture with a highly suggestive, pictorial presence leads to its perception as an independent color value. The color black thus frees itself from its hitherto primary task: the representation of physical darkness. As a frame, black continues to support and shape other color values, such as Mondrian's red, yellow and blue. In abstraction and minimalism, black is the dominant element of composition, just as it is the case here.
Soulages Peinture
Pierre Soulage's artistic thinking has also been influenced by the color black from the very start. Black became the central, fascinating statement of his painting since the late 1940s. He began to cautiously experiment with walnut stain - le brou de noix - as a color material, occasionally he allowed a bright blue or occasionally - as in our painting – a rusty red on his palette. He used black for fine gradation and then increased a tassel-wide or, as here, spatula-wide black to a powerful and vehement gesture on a beige background.
In this work, Soulages, who worked as a set designer at the Théâtre de l'Athénée in Paris from 1949 to 1952, proves his abilities as a director who knows about the effect light has on actors on the stage. Like on a theater stage, he develops light into a performative force. It defines actions and sets them in motion. Soulages also knows how to install the large format of his deep black pictures in a similar way. He turns the exhibition space into a stage on which the light lets his black pictures take shape as autonomous sculptures - as defined by the language theorist and essayist Henri Meschonnic: "Les noirs sont la matière de la lumière". But the Frenchman's works also confront the viewer with another category between light and darkness: the encounter with the obscure. Unlike abstract black, the unclear is more emotional, it has a mystical dimension. It involves the effort of trying to penetrate the mystical - at the risk of getting lost. [MvL]
Plus d'informations
+
Vendre
vous souhaitez vendre un objet similaire?
+
Enregistrement sur
Pierre Soulages
+
Questions sur l´achat
+
Contacter l'expert
209
Pierre Soulages
Peinture 92 x 65 cm, 3 aoÃ»t 1954, 1954.
Oil on canvas
Estimation:
€ 700,000 / $ 791,000
RÃ©sultat:
€ 2,245,000 / $ 2.536.849
( frais d'adjudication compris)
Plus d'informations
+
Vendre
vous souhaitez vendre un objet similaire?
+
Enregistrement sur
Pierre Soulages
+
Questions sur l´achat
+
Contacter l'expert
Ce qui pourrait encore vous intÃ©resser
+
toutes les offres
Pierre Soulages - Objets vendus
+
toutes les offres