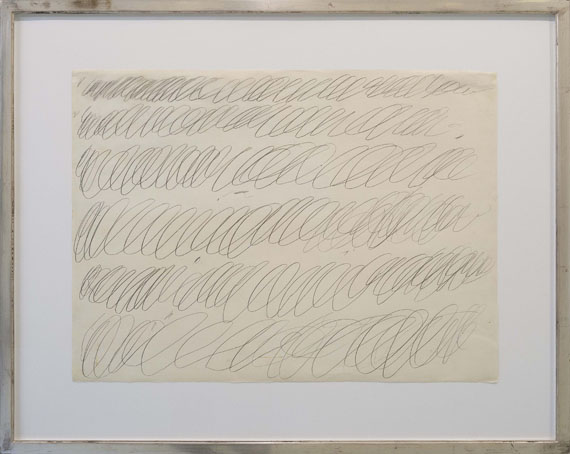 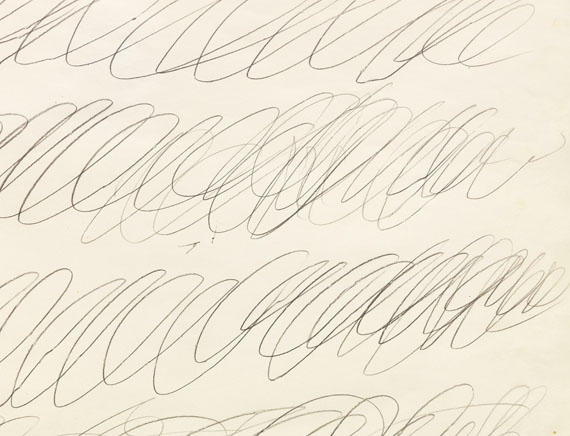 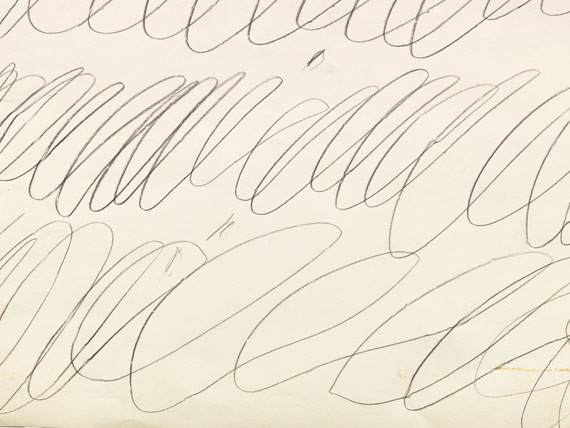 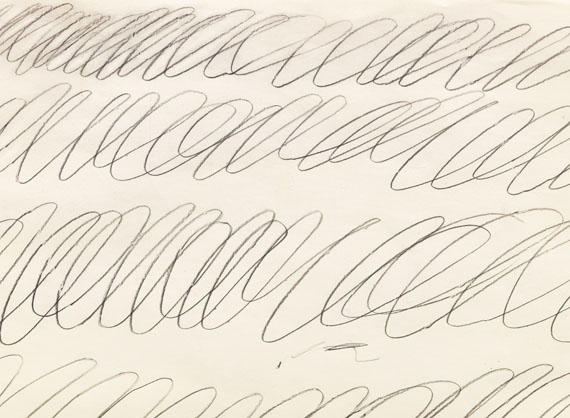 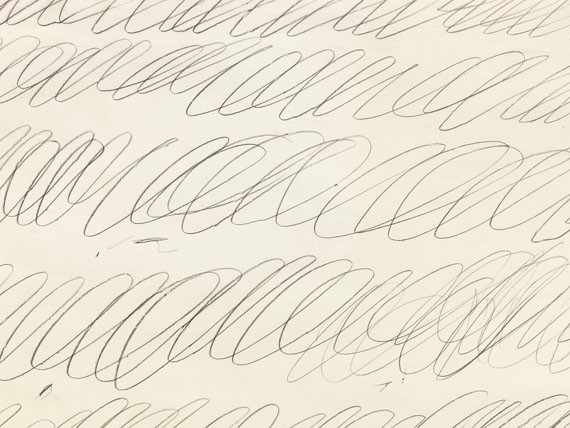 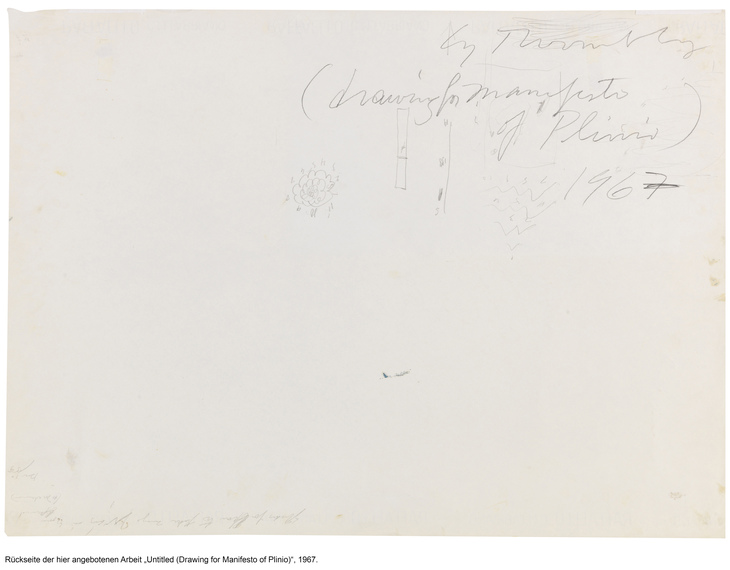 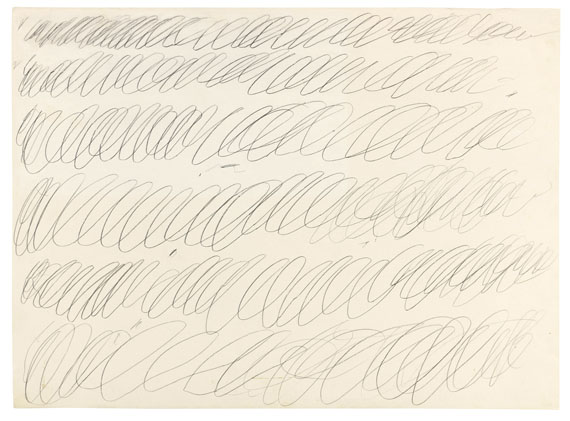 • From the important creative period between 1966-1971, which also saw the birth of the "Blackboard Paintings".
• For the first time offered on the international auction market.
• From the acclaimed collection of the publisher Lothar Schirmer.
• This motif was used for the poster of the exhibition at Galleria La Tartaruga in 1968.

LITERATURE: Nicola Del Roscio (editor), The Essential Cy Twombly, London 2014, p. 40.
"Once, someone rang the bell of Cy's apartment in Rome and there was an eighteen-year-old German in short Lederhosen. He had come down on a spring holiday on a bus from Germany with his pocket full of money from tips he made by delivering couture tailored clothes to clients of his mother. He wished to buy a drawing by Cy. Lothar Schirmer was his name, and later he became one of the best publishers of books on art."
Nicola Del Roscio, Cy Twombly. Drawings, Catalogue Raisonné, vol. 4, p. 12.

Cy Twombly's work "Untitled (Drawing for Manifesto of Plinio)" combines the paradigms of text and image with a fascinating effect and evokes a visual poetry from a wave of spiraling lines. Oscillating between the subjectivity of the gesture and the repetitive movements of a mechanical exercise, Twombly's delicate pencil lines seem to vibrate with concentrated and creative energy. Similar to handwriting, the motif is formulaic, but not mechanical. The strong gray lines that rhythmically and evenly run across the surface remain separate, like sentences that written across a page. The lines well up in a crescendo starting in upper left. In tight little spirals, following the direction of the writing, they become looser, more expansive spirals towards the lower right. It is an obvious gesture of writing, a graphic code that negates the possibility of reading. The works, which were created between 1966 and 1971 and which would become his most famous ones, are characterized by a clear rejection of color and the recapture of the pure line. They are usually kept in a reduced color palette of white and slate gray and are called "Blackboard Paintings" as they have a certain similarity with boards in schools. The drawing "Untitled (Drawing for Manifesto of Plinio)", which was also created during the five-year period of the "Blackboard Paintings", shows the same enigmatic, activated loops that characterizes the paintings in the series, but shifts the "writing" surface from a chalkboard to page from a notebook. After he had started this series in 1966, Twombly reached his artistic climax in 1969. Paintings from this year are in major institutions such as the National Gallery of Art, Washington, D.C., and the Kunstmuseum Basel. Twombly's "scribblings" are characterized by an intense immediacy. The light background of the paper is part of the composition, but the line remains its all-dominant element. The seemingly arbitrary mesh of lines is always under the control of the artist, taking into account not only the size or the number of spiral shapes, but also the pressure and sensitivity behind the execution of each line. In this sense, "Untitled (Drawing for Manifesto of Plinio)" is an elegant combination of the subliminal mysticism of Surrealist Automatism and the belief in individual personality and the gestural intentionality of Abstract Expressionism.

Cy Twombly – an artist between the worlds

Various sources of inspiration from art and cultural history, nature and science form the basis of his diverse oeuvre. For the development of his groundbreaking spiral pictures, Twombly adopted a strict, formulaic process from the 19th century, which was closely based on the Palmer-method of handwriting lessons in American elementary schools and which was also taught to Twombly. Palmer rejected the principle that the writer consciously controls the form of his writing. In his method, the movements of the writing tool are not guided by the movements of the finger, instead they are carried out by the muscles arm muscles from the shoulder. In a strict drill the proper muscle movements are trained until they become completely automatic, like an athletes‘straining. It was a daily exercise that was often accompanied by a teacher taking the time. Eventually the motif resembles these exercises, and is a skilful transition from a basic physical movement to a painterly one. Another source of inspiration can be found in Italy‘s rich art history. In 1957 Cy Twombly moved to Rome and indulged in the varied repertoire of Italian art, which would have a strong impact on his work. He was fascinated by Leonardo da Vinci's anatomical and scientific drawings - which are both graphic and abstract - throughout his life. He drew inspiration from both worlds, young America, his home country, and his adopted home, old Europe and especially Italy. He was constantly on the lookout for the origins of European art and culture, which resonate in his works and make for the mythical quality of his art. His longtime assistant Nicola Del Roscio puts it this way: "Cy Twombly benefitted from the fact that he lived on both shores of the Atlantic and, in particular, on the Mediterranean. That made him not only an American or European artist but bestowed upon him one of the rarest gifts: the possibility to continuously renew his art in a creative way up until the end of his life." (zit. nach: Nicola Del Roscio, Cy Twombly. Drawings, Catalogue Raisonné, vol. 4, p. 10).


Exemplary drawing from the important creative period between 1966 and 1971

One year after its creation, the drawing "Untitled (Drawing for Manifesto of Plinio)" was used as motif for the poster (ital. manifesto) for Cy Twomblys exhibition at Galleria La Tartaruga in Rome. The gallery‘s then manager was Plinio De Martiis, who is also mentioned in the title, and who also was the first owner of this work. Galleria La Tartaruga opened near Piazza del Popolo in February 1954 and became Twombly's main gallery in his early years. With the owner couple Plinio De Martiis and Maria Antonietta Pirandello, the Galleria La Tartaruga advanced became one of the most important Italian galleries of the 20th century under the premise of redefining the formal and moral values of art. The gallery was also the first in Italy to host exhibitions of works by American artists, including them Franz Kline, Robert Rauschenberg, Mark Rothko and Cy Twombly. Between 1958 and 1970 there were six solo exhibitions and 12 group exhibitions of Twombly‘s works. Plinio De Martiis was an important sponsor of Twombly, whose close connection with the artist is shown in the dedication of this sheet. The fact that Plinio De Martiis chose this work for the poster of the Twombly exhibition in 1968, shows how exemplary this drawing is of this creative period.
The back of the sheet gives us more clues about its history, as it has other small drawings there. Graphic elements that can also be found in drawings and pictures from 1959/60. Standing upside down, "Study for How to take my wing in your hand" is noted in the corner, the date "Dec 10/59" can still be deciphered; and perhaps a dedication to Mallarmé, which is difficult to read. Stéphane Mallarmé (1842–1898) is considered a pioneer of modern poetry and his poems are major works of Symbolism. His poetry had great influence on Twombly, who repeatedly made inventive use of literary quotations and allusions in his works, and the importance of poetry as a source of inspiration for his art is beyond question. A very exciting sheet that tells us a lot about Cy Twombly and his artistic work and leaves plenty of room for discovery.
Plus d'informations
+
Vendre
vous souhaitez vendre un objet similaire?
+
Enregistrement sur
Cy Twombly
+
Questions sur l´achat
+
Contacter l'expert
237
Cy Twombly
Untitled (Drawing for Manifesto of Plinio), 1967.
Pencil drawing
Estimation:
€ 250,000 / $ 282,500
RÃ©sultat:
€ 600,000 / $ 677.999
( frais d'adjudication compris)
Plus d'informations
+
Vendre
vous souhaitez vendre un objet similaire?
+
Enregistrement sur
Cy Twombly
+
Questions sur l´achat
+
Contacter l'expert
Ce qui pourrait encore vous intÃ©resser
+
toutes les offres
Cy Twombly - Objets vendus
+
toutes les offres