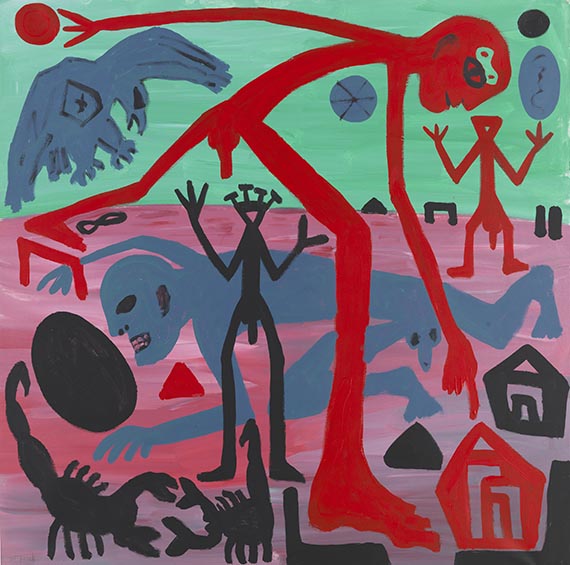 • Works from the late 1990s and 2000s in such intense colors and such a large size are very rare on the international auction market.
• The logic and the system of A. R. Penck's iconic language are singular in German post-war art.
• The pictorial language the artist conceived in the early 1960s was of significant importance for artists like Keith Haring, who examined the art of the German fellow artist upon an exhibition in New York in the early 1980s.

"I also think that it is absolutely unnecessary to add any sort of explanations to my pictures."
A. R. Penck, in: Kunstforum, vol.12, Ich über mich selbst.

In 1961, Ralf Winkler – that was A. R. Penck’s birth name – visited his painter friend Georg Baselitz in his Berlin studio. The visitor is impressed by the "provocative objectivity of the pictures assembled there". After this visit to the studio, Ralf Winkler changed his own pictorial language and began "to conceive world and system images, the signs of which become carriers of complex information and thought signals". He develops "a pictorial form of language that sees itself as pictorial research" and "orients its structure to the content that it conveys. Without being tied to concrete events, it is about problematic situations and conflicts of decision making in the social reality of the individual person" (quoted from: Karin Thomas, in: E. Gillen (ed.), Deutschlandbilder, Berlin 1997, p. 550). They are sometimes simply called "cave painting", which in no way does justice to the complex sign systems that are used in the most diverse cultures.

Mars is also called the red planet and has always fascinated mankind. At a distance of approx. 228 million kilometers, it is very close to earth, there are polar ice caps, ice, seasons, volcanoes and much more that repeatedly stimulates consideration as to whether life could be possible in this place. As early as in the late 1900s, the Martians became the epitome of extraterrestrial life in stories and legends. Penck is very interested in these stories. He loves science fiction and starts reading Perry Rhodan magazines with great enthusiasm at an early age. The shallow entertainment is not in the foreground, but rather the design of alternative systems. Are worlds conceivable that enable a fundamentally different coexistence? Another literary point of reference is likely to have been known to Penck: "The Red Planet" or "The Red Star" is the German title of a utopian novel written by Alexander Bogdanov in 1907, which describes a socialist social order on Mars. Penck's “Red Planet” is to be understood precisely against this background. You can see the eagle, an image often used by the artist for West Germany. At the bottom of the picture we see two fighting scorpions, like competing systems they do everything possible to overcome the opponent along with all his values \u8203\u8203 and ideas. In the center of the picture is a red figure walking ahead, pointing to a red shape with its right index finger. Subdued on the ground, it seems, lies another figure. Isn't the right hand tied in a red angle? Penck always has the idea of \u8203\u8203 a balance worth striving for in mind. The one thing must never be subdued by the other. This applies to interpersonal problems as well as to conflicts between competing systems. Penck's visual language follows a logic. His pictures can be read, but never just in one way or another. The artist doesn't want to decode his pictures, because that would rob them of their magic.