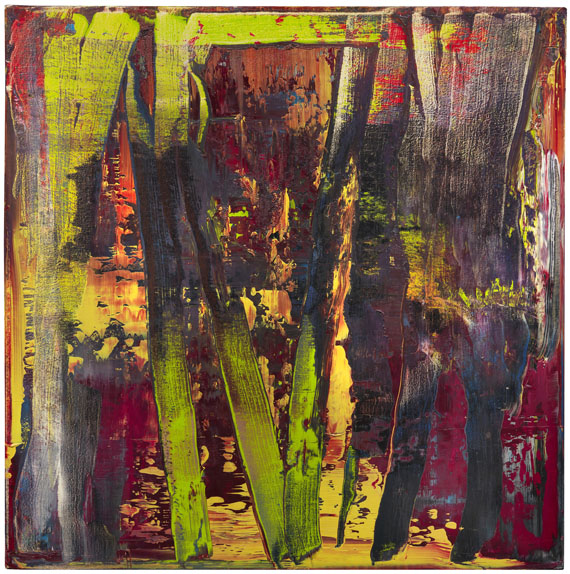 • The artist's signature style shows in the gestural motion of "Abstraktes Bild 665-4".
• Richter's squeegee-made "Abstract Pictures" are the internationally most sought-after works in his oeuvre.
• With squeegee and palette-knife, Richter excavates multilayer pictorial spaces like an archaeologist.
• The year this work was made, the personally emotional year 1988, he also made "Betty" (Saint Louis Art Museum) and the famous RAF cycle "18. Oktober 1977" (Museum of Modern Art, New York).

"To me it's all about painting"
Gerhard Richter 1973

"Abstract pictures are fictituous models as they illustrate a reality we can neither see nor describe while we can still count on its existence."
Gerhard Richter. Text 1961 bis 2007. Schriften, Interviews, Briefe, Verlag der Buchhandlung Walther König, Cologne, 2008, p. 121.

This abstract painting by Gerhard Richter comes from a very exciting phase of his work. A series of large-scale abstractions is followed by a number of depictive paintings, including the famous work entitled "Betty" (CR 663-5) of a young woman in a light-colored jacket with a red flower pattern. This portrait, which does not depict a face, became a kind of "Mona Lisa of the 20th Century" and, next to the "Kerze" from 1982 (CR 511-3), probably the most popular painting by Gerhard Richter. Our painting is followed by a series of abstract large formats with an intensive structure, before the work group "October 18, 1977 ", which is followed by the so-called "Bader-Meinhof-Cycle". Richter painted these paintings according to the photos published in Stern magazine, showing them blurred in dull gray. All of these pictures were created in 1988. This context of origin illustrates Richter's broad understanding of painting. The painter says : "'Abstract' and 'figurative' are very simple terms and possibly wrong. 'Abstract' has a different meaning, but I wouldn't mind if we used the terms 'figurative' and 'non-figurative'. …Both are kind of realistic. Art makes artificial reality visible and also the other." (quoted from: Gerhard Richter, Gespräch mit William Furlong, Jill Lloyd, Michael Archer und Peter Townsend 1988 in: GR Text edited by Dietmar Elger and Hans Ulrich Obrist, Cologne 2008, p. 208)

What is striking about our painting (CR 665-4) is that - in contrast to the series of non-representational pictures with open color grids created in the immediate vicinity - the painter is clearly concerned with structure, with a consciously created order here. The clarity of an arrangement, which is the principle for representations, he lays over a picture ground in color strips, in which warm, deep red tones are mixed with yellow, light paint with a squeegee to form a background. Like a heavy, woven fabric that demarcates an indefinable space, there is a fiery wall in front of which colored bars furrow vertically, some also diagonally, sometimes even across the picture‘s surface. The green brush marks were created by applying paint, partly also by scratching and scraping with a sharp spatula. By scraping free, the paint does not tear off smoothly, but rather reveals color particles that lie deeper and shine through. In the dense background, the squeegee has torn larger "windows" with views into bright areas of color. On the left and right edge of the picture, the color bands lose their green luminosity and appear as pale schemes. When looking at it, one tends to assume that there are letters or runes in the bars, but without being able to read anything.
Gerhard Richter cultivates this fascinating oscillation between representational and non-representational pictorial inventions. Depending on the work, his color plates from 1966 show different numbers and sizes of single-color rectangles – they are therefore non-representational. However, since they are painted from sample cards from the paint shop, they depict something and come close to a work of Pop Art. Huge paintings for BMW (1971 CR 345-1 to -3) were created with the help of detail photos of color samples on a palette. The images appear like landscapes based on horizontal lines. They have a real starting point in the mixed color paste, which, photographed and enlarged, provides the templates. However, they remain non-representational. The large paintings "Silkat" from 2003 (CR 885 1-4) show atomic structures that appear as abstract patterns, however, they depict concrete reality that we cannot see with the naked eye. In his book "WAR CUT", 2004, Richter illustrated texts from the newspaper FAZ from March 20 and 21, 2003, the day the Iraq war broke out, with 216 color photos of his abstract painting (CR 648-2) from 1987. Since there was complete censorship of photos showing the war events on the ground, these non-representational details became representative images. Thanks to the context with the text, however, one could imagine the reproduction of actual events. It is not enough to imagine blood in red, nature in green, and stone in gray, and figures, people, and houses in many contour lines.

In the present work from 1988, there is only a reference to reality in the material setting of this painting. This painting does not pretend, but embodies liveliness and sensuality through the use of color with the special technical means of expression that Gerhard Richter has developed in different work processes.