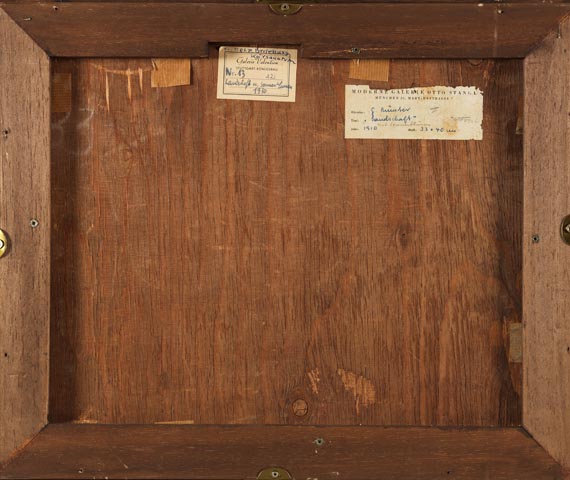 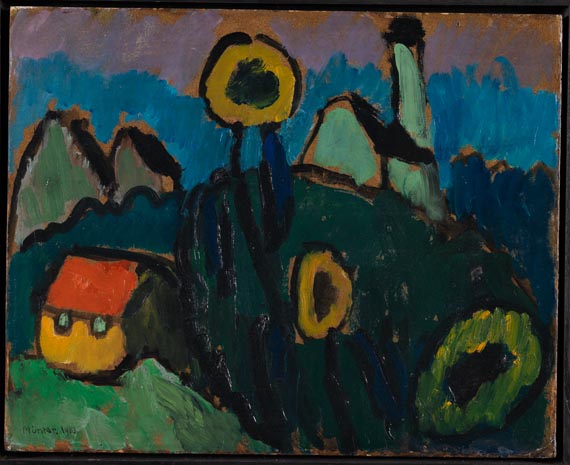 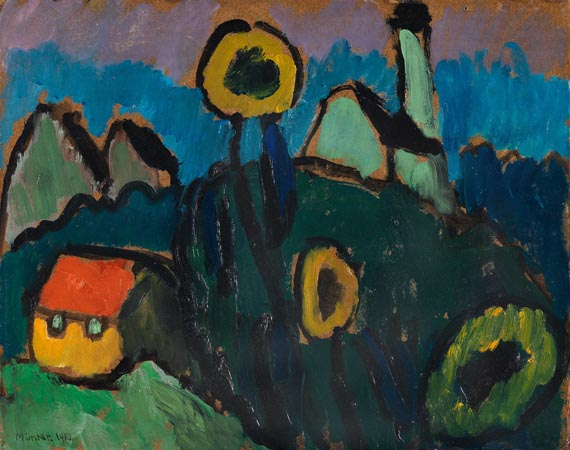 Gabriele MÃŒnter received her first art lessons at the 'Damen-Kunstschule' (Ladies Art School) in DÃŒsseldorf and then attended the Society of Female Artists as pupil of M. Dasio and A. Jank. Then she went to Munich where she visited the private art school 'Phalanx' which was run by Wassily Kandinsky. In 1904 MÃŒnter and Kandinsky began travelling together, they went to Holland, Italy, France - where they met Rousseau and Matisse - and other places. Stylistically she then began to distance herself from Impressionism and her works began showing Fauve and Expressionist influences. In 1908 she and Kandinsky began leading a calmer life in their apartment in Munich. They often met with Klee, Marc, Macke, Jawlensky and Marianne von Werefkin. The country house MÃŒnter bought in Murnau provided an ideal working environment. In 1909 the artist began making reverse glass paintings, a medium which would later also be adopted by Kandinsky, Marc, Macke and Campendonk.

Collecting popular reverse glass paintings and the intense examination of this painting style, particularly in terms of its contours, had a liberating effect on the artistic development of Gabriele MÃŒnter. She left a period of late expressionist painting behind her and used, also under the influence of Wassily Kandinsky, the clearly contoured form as her medium. From that point on it was not the particularly differentiated color grading that defined her works, but rather a compact array of forms. This decisive step in a new period of her artistic creation became manifest over the first couple of years in Murnau, beginninf around 1908. Ganbriele MÃŒnter consistently pursued this way, even in the 30s and 40s, when she was working under increasingly difficult circumstances. From the three main groups of topics that shape MÃŒnterâs Åuvre, landscape, still life and portrait, the first gave her the best opportunity to implement her ideas in. With this field MÃŒnter made an independent contribution to German modern art.

MÃŒnter was a member of the 'Neue KÃŒnstlervereinigung MÃŒnchen' (âNew Munich Artistâs Associationâ) for two years and in 1911 she joined the 'Blauer Reiter'. She was interested in Kandinsky's development towards abstract art, but her own works continued to be figurative. World War I broke out, MÃŒnter and Kandinsky at first moved to Switzerland. MÃŒnter, however, decided to go to Stockholm a year later, where she separated from Kandinsky. In late autumn 1917, she moved to Copenhagen. She travelled a lot during the 1920s and spent some time in Munich, Murnau, Cologne and Berlin. After 1931 she spent most of her time in Murnau and Munich. In 1956 she received the Culture Prize of the City of Munich. The year 1960 saw the first exhibition of MÃŒnter's work in the US, followed in 1961 by a large show in the Mannheim Kunsthalle. The artist died in her house at Murnau in 1962. [KD].