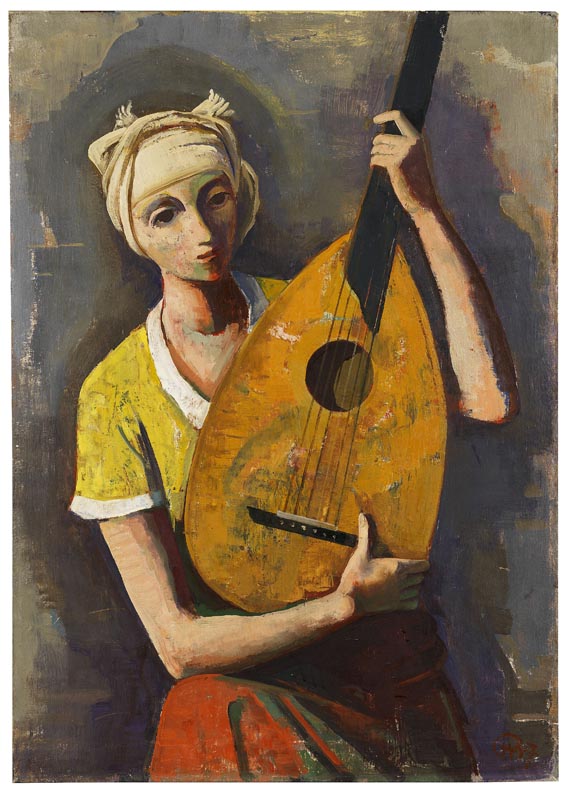 Karl Hofer was born in Karlsruhe on 11 October 1878 the son of a military musician. After an apprenticeship in C.F. MÃŒller's court bookstore, he began to study at the GroÃherzoglich Badische Akademie der Bildenden KÃŒnste in Karlsruhe in 1897. Here he studied under Poetzelberger, Kalckreuth and Thoma until 1901. None of these teachers, however, were able to provide him with ideas for his ambitious striving for a new art form and he soon came under the influence of Arnold BÃ¶cklin. Hofer traveled to Paris in 1900 where he was greatly impressed by Henri Rousseau's naive painting. The art historian Julius Meier-Graefe introduced Hofer not only to private collections worth while seeing in Paris, but also drew his attention to Hans von MarÃ©es. As a result Hofer decided in 1903 to spend a couple of years in Rome. His painting, which was until then influenced by BÃ¶cklin's Symbolism, changed in favor of MarÃ©es' classic-Arcadian concept. In 1904 the Kunsthaus Zurich presented Hofer's first one-man show within the âAusstellung moderner Kunstwerke', which was afterwards shown in an extended version at the Kunsthalle Karlsruhe and at the Folkwang-Museum in Hagen and in Weimar in 1906. From 1908 Hofer lived temporarily in Paris. The stay changed his style through dealing with influences of CÃ©zanne, French Impressionists and El Greco. In 1913 the artist moved to Berlin. He was interned in France one year later and only returned to Germany in 1917. He accepted a post as a professor at the Kunstschule in Berlin-Charlottenburg in 1921. On the occasion of his 50th birthday a retrospective took place at the Kunsthalle Mannheim, the âBerlin Secession' and Alfred Flechtheim's gallery in Berlin. His art was considered "degenerate" during the 'Third Reich' and he was dismissed from his teaching post in 1933/34. His works were exhibited in 1937 in the Munich exhibition 'Entartete Kunst'.

Karl Hofer executed three versions of this subject. Even though they all follow the same composition, they could not be more different from one another. A fourth version, also from 1933, changed the theme through its room arrangement with a window in the background (Wohlert 1014). The two earlier works with the same motifs from 1932 and 1933 (Wohlert 981 and 1013) show that Hoferâs works from these days are subject to a formal structure that is no longer pursued in the later version from 1937. It was abandoned in favor of an internalized perspective which Hofer would follow from that point on. While the clearly defined composition dominates the painting in the two early pictures from the 1930s, the later work shows lyrical tendencies, from which the theme benefits. The luteâs is still presented the same way, however, the girlâs dreamy look adds more atmospherical value to the composition. A value that could not be felt in the earlier versions. The forms are softer, the overall concept more pictorial. With these works Karl Hofer made variations of a theme that is completely in line with his figure canon, particularly in terms of its closed configuration. His ideas clearly reference the paintings of Italian Renaissance.

Hofer lived in Berlin for the rest of his life. He was the director of the Hochschule fÃŒr Bildende KÃŒnste in Berlin. [KD].