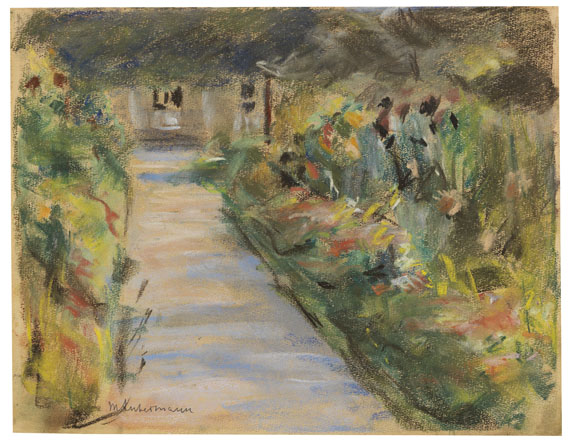 Accompanied by a photo expertise issued by Drs. Margreet Nouwen, Berlin, dated 1 December, 2009 (in copy). The work will be included into the forthcoming catalog raisonné of pastels, watercolors and gouaches by Max Liebermann.

Max Liebermann began capturing his immediate environment on paper at the age of nine. When the renowned Berlin painter Carl Steffeck saw drawings by the fifteen-year-old he recommended that the boy's talent should be encouraged as much as possible - much against his parents ideas. Steffeck gave Liebermann his first drawing lessons and encouraged him to attend the Weimar Akademie. Liebermann studied in Weimar for three years until 1872. A trip to Düsseldorf in 1871 took the young artist to Mihály Munkácsy, a Hungarian painter who lived here. Liebermann was inspired by Munkácsy's Realism. Still under this impression, Liebermann painted his first large painting, 'Die Gänserupferinnen' (Girls plucking Geese). The unadulterated realism of this work, which was much rejected among the critics, was to become typical of Liebermann's art. He spent the years 1873 to 1878 in Paris and the artist colony of Barbizon. Here he studied the art of Millet, whose paintings of farm workers had a strong influence on him. A first sojourn in Holland in 1871 was followed by regular trips to the Netherlands, where he discovered suitable motifs for his most important works. His striving to elevate the life and work of the simple man to the realms of art in an unpretentious simplicity was not generally accepted. Liebermann continually fought for acceptance. Only after turning towards motifs and scenes of bourgeois life did he become the celebrated and sought after painter of the liberal bourgeoisie of the turn of the century. He spent the years 1878 to 1884 in Munich and then returned to his native town Berlin in 1884. Liebermann was an important personality not only as an artist but also as an art politician. At the beginning of 1892 he was a member of the 'Erste Sezession Deutschland', an organisation which he chaired in Berlin from 1898 to 1911. His home town honoured Liebermann by appointing him professor at the Königliche Akademie der Künste. Later, from 1920 to 1932, he was the president of the Preußische Akademie der Künste.

The house acquired ín 1909 on the Wannsee with its narrow garden leading down to the lake, was intended as a summer residence and in the following more and more became the artist‘s domicile where he found a variety of motifs. Whether useful or decorative plants, that played close to no role in Liebermann's sense. He has left behind a large number of paintings in which he worked up his impressions particularly of these subjects. But even in small format, especially in pastels, Lieberman shows his delight in capturing his impressions. In their gestural picturesque way in which it Liebermann rendered them on paper, the pastels are, a special document of this intense occupation with the lush nature that surrounded him. Liebermann summarized his impressions in broadly arranged surface compositions and yet he allows the pastel brush a life of its own, which distinguishes it from the painterly brush. The side light, a specialty of Liebermann, creates an illusion of three-dimensionality, which goes far beyond the small format of this work.

He became severely ill in 1934 and died three months later in isolation in his Berlin apartment. [KD].