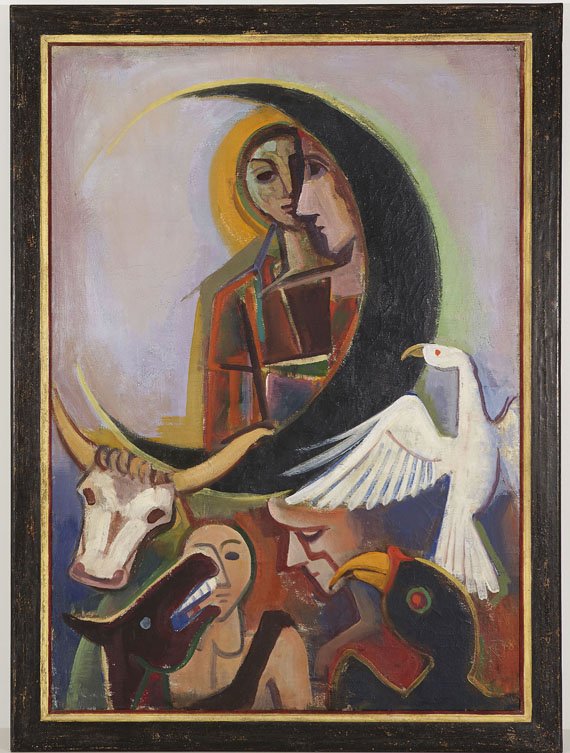 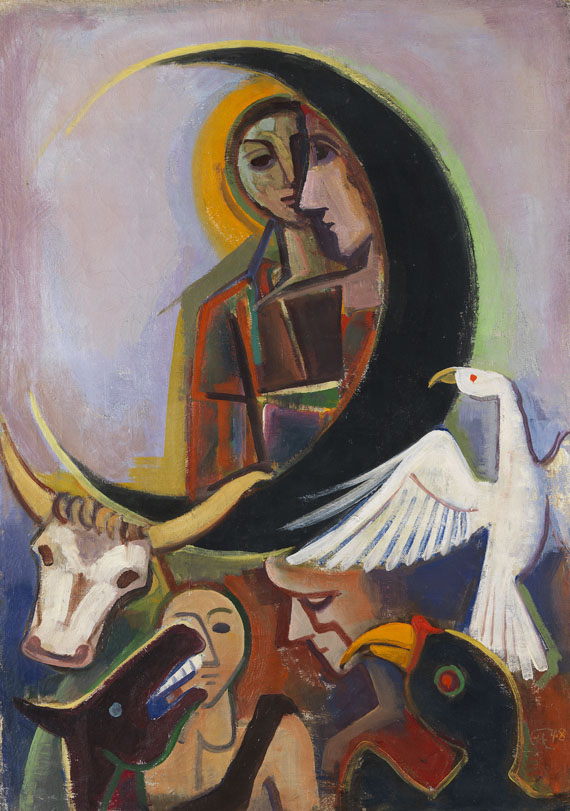 Karl Hofer was born in Karlsruhe on 11 October 1878 the son of a military musician. After an apprenticeship in C.F. MÃŒller's court bookstore, he began to study at the GroÃherzoglich Badische Akademie der Bildenden KÃŒnste in Karlsruhe in 1897. Here he studied under Poetzelberger, Kalckreuth and Thoma until 1901. None of these teachers, however, were able to provide him with ideas for his ambitious striving for a new art form and he soon came under the influence of Arnold BÃ¶cklin. Hofer travelled to Paris in 1900 where he was greatly impressed by Henri Rousseau's naive painting. The art historian Julius Meier-Graefe introduced Hofer not only to private collections worth while seeing in Paris, but also drew his attention to Hans von MarÃ©es. As a result Hofer decided in 1903 to spend a couple of years in Rome. His painting, which was until then influenced by BÃ¶cklin's Symbolism, changed in favour of MarÃ©es' classic-Arcadian concept. In 1904 the Kunsthaus Zurich presented Hofer's first one-man show within the âAusstellung moderner Kunstwerke', which was afterwards shown in an extended version at the Kunsthalle Karlsruhe and at the Folkwang-Museum in Hagen and in Weimar in 1906. From 1908 Hofer lived temporarily in Paris. The stay changed his style through dealing with influences of CÃ©zanne, French Impressionists and El Greco. In 1913 the artist moved to Berlin. He was interned in France one year later and only returned to Germany in 1917. He accepted a post as a professor at the Kunstschule in Berlin-Charlottenburg in 1921. On the occasion of his 50th birthday a retrospective took place at the Kunsthalle Mannheim, the âBerlin Secession' and Alfred Flechtheim's gallery in Berlin. His art was considered "degenerate" during the 'Third Reich' and he was dismissed from his teaching post in 1933/34. His works were exhibited in 1937 in the Munich exhibition 'Entartete Kunst'.

Karl Hofer, who was director of the Berlin Art Academy as of July 1945 and president of the 'DeutscherKÃŒnstlerbund' (German Artists Association), which was founded anew after the war, was a passionate fighter, both in words and letters, against new tendencies in German post-war art towards abstraction. He showed with great intensity that figuration, especially the depiction of the human body, deserves and occupies a dominant role in post-war art. This work shows a young couple in waxing moon, a symbol of virginity, another couple with animals below, and yet below a bull and a horse representing fertility and patience. This is a wonderful example of the artist's general attitude. With "Schwarzmond" he made the first of a series of so-called Lunares pictures, which was continued in several works between1950 and 1953 (cf. W. 2356, 2361, 2388, 2560, 2644). However, some of these works also show Hofer's occupation with abstraction.

Hofer lived in Berlin until he died in 1955. He was the director of the Hochschule fÃŒr Bildende KÃŒnste in Berlin. [DB]