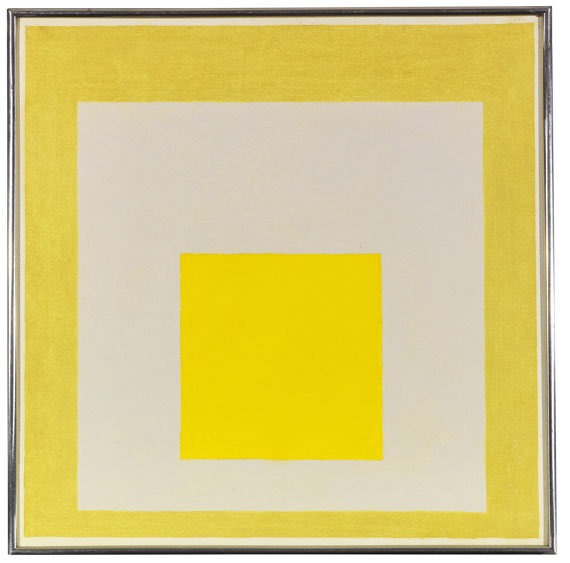 Essay
Our work "Two Yellows with Silvergray" from 1960 is part of the famous series "Homage to the Square" which Albers made from 1949 up until his death in 1976. Even though the entire series is merely occupied with just one form - the (truncated) square â€“ every work is unique and not at all visually exhausting. On contrary: "Homage to the Square" is astounding in ever new ways, because Albers uses the recurrent form in order to meticulously explore every detail of the colors. This method can be well understood using the example of "Two Yellows with Silvergray". Albers' finding that color is no absolute value but that it has to be perceived in context of its surroundings is the fundamental assumption for the analysis. Size, position and shading of neighboring areas are decisive for the perception of color. In order to explore this phenomenon, Albers arranges his pictures following a basic geometrical pattern that allows a comparison: three or four squares in different sizes, their center positioned on the same vertical center axis. In our work the center square is in a bright shade of yellow, the outermost one in a darker shade. A slightly silverish gray is between the two yellow fields. The astounding â€œglowâ€œ, which lets the center square appear like a bright translucent sun, is caused by the contrast of the two shades of yellow and the structural perception of each surface. The neutral silver-gray acts as a separating agent and increases this effect. The phenomenon known as 'simultaneous color contrast' leads to a purple tone: When switching the focus from the yellow to the gray square the eye reproduces the complementary color. Similar optic effects can be discovered in "Two Yellows with Silvergray". A remarkable picture that offers ever new visual challenges.
Plus d'informations
+
Vendre
vous souhaitez vendre un objet similaire?
+
Enregistrement sur
Josef Albers
+
Questions sur l´achat
+
Contacter l'expert
770
Josef Albers
Study for Homage to the Square: Two Yellows with Silvergray, 1960.
Oil on fibreboard
Estimation:
€ 180,000 / $ 216,000
Résultat:
€ 387,500 / $ 465.000
(25% frais d'adjudication compris)
Plus d'informations
+
Vendre
vous souhaitez vendre un objet similaire?
+
Enregistrement sur
Josef Albers
+
Questions sur l´achat
+
Contacter l'expert
Autres images 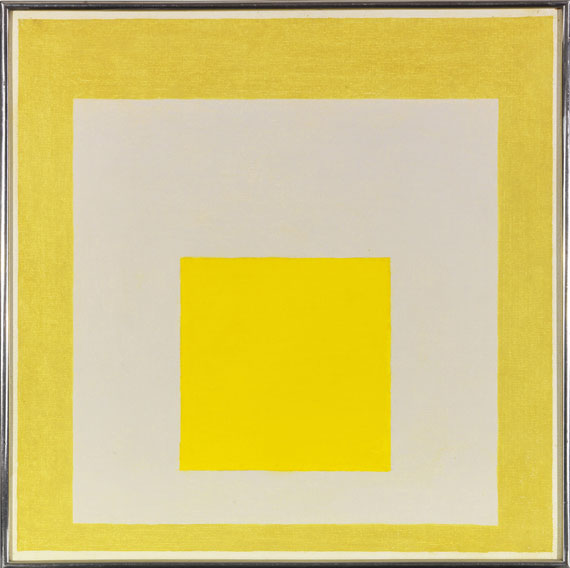