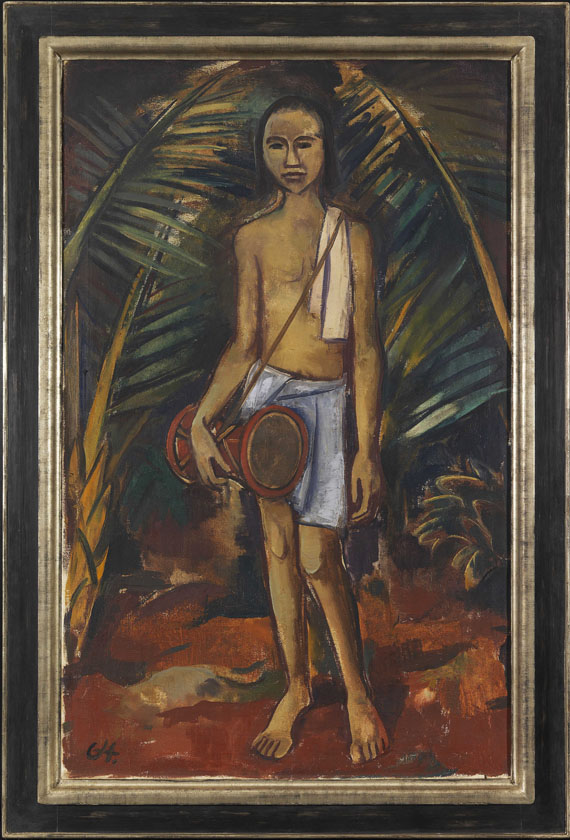 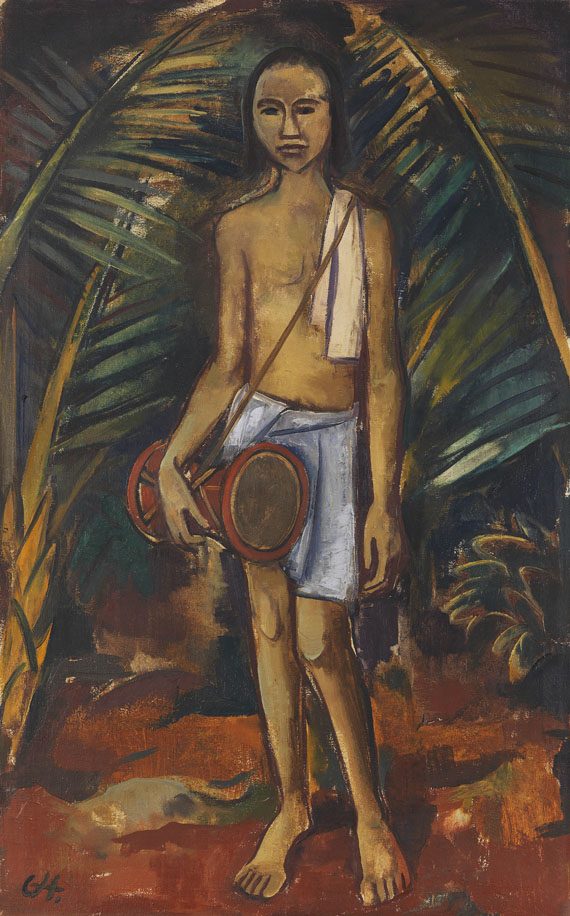 LITERATURE: Christoph Otterbeck, Europa verlassen: Künstlerreisen am Beginn des 20.Jahrhunderts, Cologe 2007, pp.187-195 (Karl Hofer in Indien (1910/11 and 1913).
"I finally found what I had been desperately looking for over years: Models in free and delightful situations" Karl Hofer in a letter to Theodor Reinhart from December 6, 1910

After an apprenticeship at C.F. Müller's court bookstore, he began to study at the Großherzoglich Badische Akademie der Bildenden Künste (Grand Ducal Academy of Fine Arts) in Karlsruhe in 1897. There he studied under Poetzelberger, Kalckreuth and Thoma until 1901. None of these teachers, however, was able to provide him with ideas for his ambitious strive for a new art form and he soon came under the influence of Arnold Böcklin. Hofer traveled to Paris in 1900 where he was greatly impressed by Henri Rousseau's naive painting. The art historian Julius Meier-Graefe introduced Hofer not only to private collections worthwhile seeing in Paris, but also drew his attention to Hans von Marées. As a result Hofer decided to spend a couple of years in Rome in 1903. His painting, which had been influenced by Böcklin's Symbolism until then, changed in favor of Marées' classic-Arcadian concept. In 1904 the Kunsthaus Zurich presented Hofer's first one-man show in the ”Ausstellung moderner Kunstwerke' (Exhibition of Modern Artworks), which was also shown in an extended version at the Kunsthalle Karlsruhe and at the Folkwang-Museum in Hagen and in Weimar in 1906. Between 1908 and 1913 Hofer lived and worked in Paris.
Two trips to India in 1911 and 1913 had a much stronger influence on Hofer than the French capital did. His patron, Dr. Theodor Reinhart from Winterthur, whose company had several branches on the Malabar Coast, had paid for these trips. Hofer had an idea of what these journeys could possibly mean to him, when he wrote "Perhaps it is not clear what gain it might mean for me if I possibly find what Delacroix had found in Morocco." Julius Maier Graefe makes a comparison with van Gogh's visit to Arles, when he describes the lasting impact these trips had on Karl Hofer's work as follows: "The Malabar Coast became an Arles for that tenacious utopian and his tough skins melted like snow in the sun. [..] In the tropics he approached French Sensualism. [..] The exotic world made Paris a mediocre norm, unleashed his senses, deepened and simplified the impressions gained in Paris. He familiarized himself with Greco's mysticism on the Pepper Coast." (Julius Meier-Graefe, in: Karl Hofer 1878 - 1955, ex. cat Staatl. Kunsthalle, Berlin 1978, p. 89). This is one of the first works in Karl Hofer's oeuvre with the characteristic, deeply self-absorbed person as motif. The austere, clearly defined forms and the poeple depicted engrossed in thought, which would become so characteristic of his later works, allow for a delimitation of the figure in this early work, which laid the basis for an artistic path that was far from any kind of cheap gallery play. [EH]
In 1921 he accepted a post as professor at the Art School in Berlin-Charlottenburg. On the occasion of his 50th birthday a retrospective of his work was shown at the Kunsthalle Mannheim, which was also shoen at the ’Berlin Secession' and Alfred Flechtheim's gallery in Berlin. His art was considered "degenerate" during the 'Third Reich' and he was dismissed from his teaching post in 1933/34. His works were exhibited in the Munich exhibition 'Entartete Kunst' (Degenerate Art) in 1937. Up until his death in 1955 Hofer lived in Berlin and held the post as director of the Academy of Visual Arts.
Plus d'informations
+
Vendre
vous souhaitez vendre un objet similaire?
+
Enregistrement sur
Karl Hofer
+
Questions sur l´achat
+
Contacter l'expert
814
Karl Hofer
Hinduknabe, Um 1911/12.
Oil on canvas
Estimation:
€ 180,000 / $ 183,600
RÃ©sultat:
€ 225,000 / $ 229.500
(25% frais d'adjudication compris)
Plus d'informations
+
Vendre
vous souhaitez vendre un objet similaire?
+
Enregistrement sur
Karl Hofer
+
Questions sur l´achat
+
Contacter l'expert
Ce qui pourrait encore vous intÃ©resser
+
toutes les offres
Karl Hofer - Objets vendus
+
toutes les offres