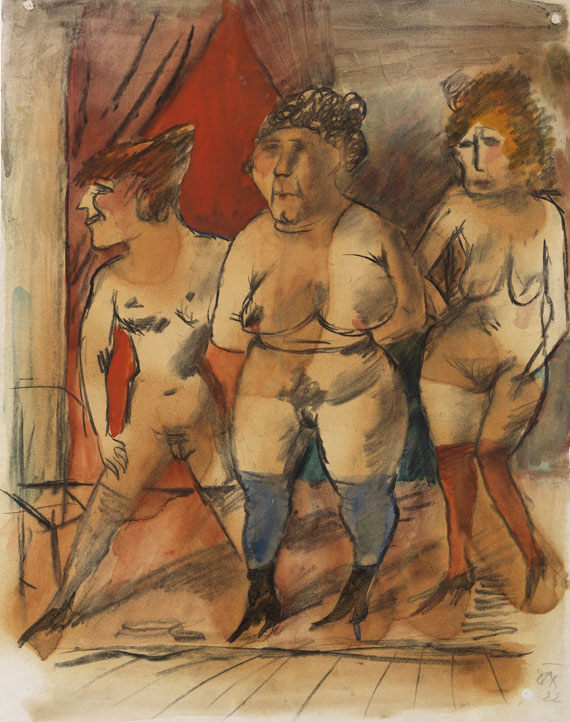 • While Kirchner shows dignified and aloof cocottes on the curbs of the streets of Berlin, Dix addresses the realities of prostitutes in a raw and unadorned straightforwardness.
• Dix emphasizes the effect of a provocative vulgarity.
• "Disillusionment of the Eros" (Fritz Löffler)
• Large-size work from the sought-after 1920s
• Family-owned for more than 60 years.

Essay
In addition to the large number of important paintings that Otto Dix first made, initially in Dresden after World War I and then in Düsseldorf from 1922 to 1925, it was primarily watercolors and drawings that made up for a good part of the production of those most prolific years of his life. Two topics fascinated the artist at this time: war and whores. Dix coped with his personal experiences of war, the horrors of death, the victims of the civilian population and the cruelty of the brutalized soldiers through creating numerous pencil-, chalk- and charcoal drawings, which he executed right in the trenches on the front and which culminated in his graphic main work, the cycle "Der Krieg" (The War, 1924) comprising 50 etchings delivering an even more brutal, direct and relentless account of the atrocities. Dix also confronts the motif of death with the lives of prostitutes. The prostitute embodies vitality, she is life-affirming, however not romantic or naive, but brutally realistic and anti-bourgeois, if not to say 'matter to fact'. The artist's first biographer, Fritz Löffler from Dresden, coined the formula for the "disillusionment of eros". Dix noted what he saw when he lived at the end of Ziegelgasse in the brothel district of Dresden's old town in 1919 and was in the milieu, like Henri Toulouse-Lautrec in Montmartre, Heinrich Zille in Berlin Wedding or Ernst Ludwig Kirchner on Potsdam Square. Dix found his models in the cafes on Altmarkt, on Seestraße and on the Ring, where he walked up to the women on the street who interest him right on the street, evetually making them the protagonists of his exuberant brothel scenes. Kirchner's noble and aloof cocottes on the Berlin streets stand in stark contrast to the unsparing account of theme of the whore in Dix‘ art. They are characterized by a potent directness and can do entirely without the the expressionist pathos of a Kirchner. Dix documents life and work of "Olga", "cheeky Berta", "sweet little Elly" and "Gretel" mercilessly and straight-foward: However, he does not necessarily want to address social criticism. On the contrary: the three prostitutes of different ages and probably also professional experience step onto the brothel stage and expose their bodies. They are neither elegant dancers, nor supple artists, or even ephemeral figures, instead they are women who purposefully and resolutely pursue their profession and have prepared themselves accordingly: With excessive make-up on, the hair tidy, maked and at best dressed in colorful stockings, fixed with ribbons, in pointed, high-heeled ankle boots. Dix visibly emphasizes the effect of a provocative vulgarity, at most he lets the grotesque of the situation resonate.Dix is not a voyeur, he is a compassionate sympathizer. He models the female body with the same graphic gesture as the dead soldiers in the trenches. With the delicate use of red, red-orange and blue watercolors Dix adds a sultry atmosphere of this large-format sheet. The composition of the "Three Whores" is of a unique rank and undoubtedly is on a par with the painting "The Salon I" from the same year. It shows two of the three women who prostitute themselves in the one work sitting properly at the table taking another prostitute in their midst, neatly dressed up, the nudity of their bodies barely covered by the light apparel, the hair laboriously styled with feathered headdresses, waiting while "Gretel" arranges her décolleté. A preliminary drawing of her has survived and it is not wrong to identify “Gretel” with the dominant whore in the center of the watercolor. Otto Dix‘ paints the grimace of prostitution in watercolors, exaggerating the contrast between the lush interior and the emptiness of the women who carry their bodies to the market. Along with them, the plush, well-decorated atmosphere of the parlor has also worn off, as the wallpaper in Art Nouveau decor shows clear cracks. [MvL]
Plus d'informations
+
Vendre
vous souhaitez vendre un objet similaire?
+
Enregistrement sur
Otto Dix
+
Possibilités déenchère
+
Enchère par téléphone / Enchère écrite
+
Questions sur l´achat
+
Contacter l'expert
209
Otto Dix
Drei Weiber, 1922.
Watercolor over charcoal on paper
Prix d´après-vente: € 200,000 / $ 238,000
Plus d'informations
+
Vendre
vous souhaitez vendre un objet similaire?
+
Enregistrement sur
Otto Dix
+
Possibilités déenchère
+
Enchère par téléphone / Enchère écrite
+
Questions sur l´achat
+
Contacter l'expert
Autres images 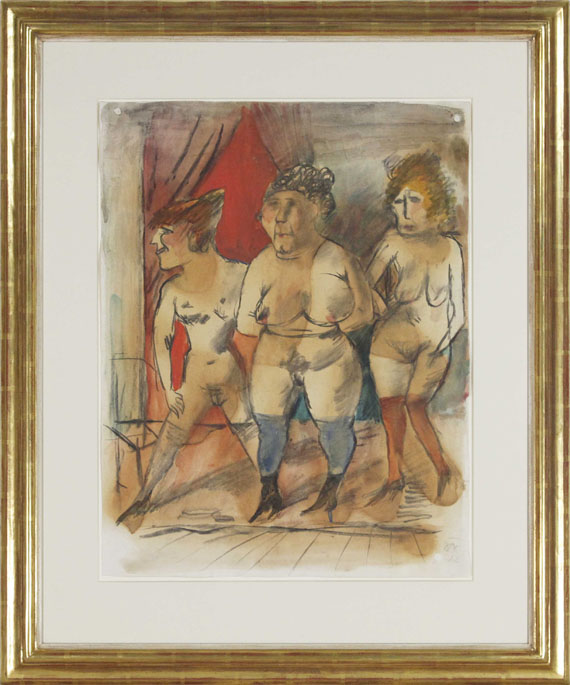 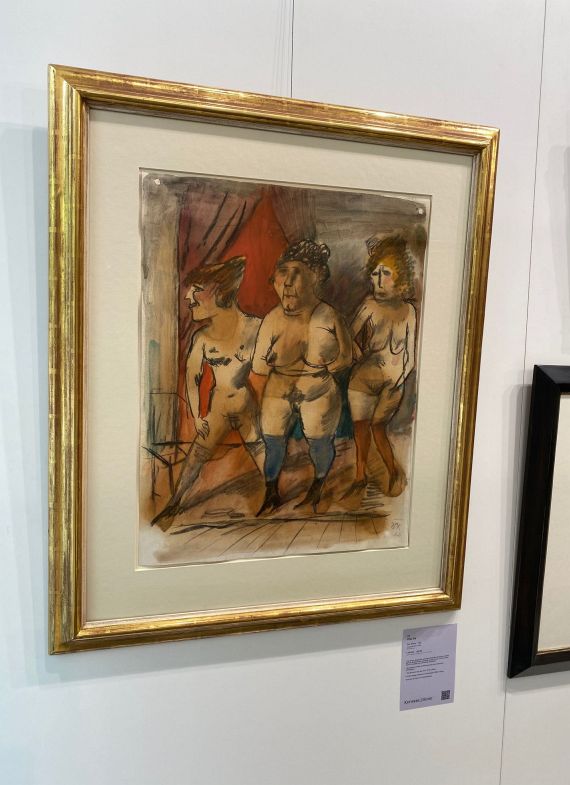