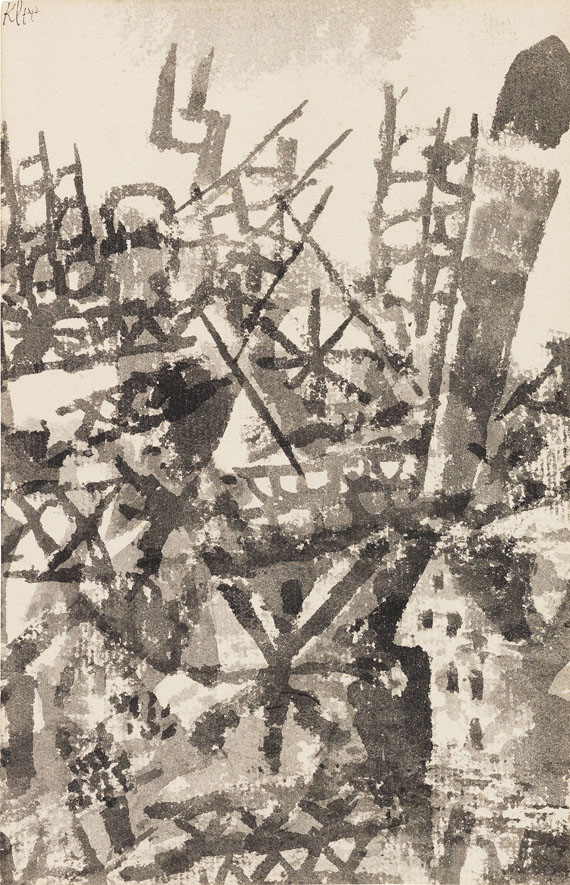 Essay
Although he was not drafted for military service before March 11, 1916, Klee had led a kind of double life as artist and soldier since the outbreak of World War I. August Macke, with whom he embarked on the delightful trip to Tunis in April 1914 - the Swiss Louis Moilliet was the third member of the party - fell in the French Champagne in September 1914. News of the heroic death of his friend Franz Marc near Verdun on March 4, 1916, had probably not reached the new recruit yet. Unlike Klee, the Francophile Franz Marc supported the war and saw it as a necessity that would liberate Europe from 19th-century materialism and pave the way into a new and more spiritual era. He was not the only one in such a mindset, as a large part of the German intelligentsia shared these hopes with him. A week later the Swiss Paul Klee, who had German citizenship, received his draft order. Klee was trained in the Bavarian town of Landshut. When Klee's family learned about his imminent redeployment to the front, they made every effort to prevent this from happening. Eventually stationed in Schleissheim near Munich in August 1916, his task, in line with his profession as painter, was to paint aircraft parts with camouflage paint, to mend them and to apply the Iron Cross and numbers and letters used for identification purposes onto the planes’ bodies by means of a stencil. In January 1917, Klee was transferred to Gersthofen near Augsburg, where he served as clerk in the flight school’s cash department until the end of the war.
World War I broke out around three months after the had returned from Tunisia. Klee, who initially defended the war, wrote to the Bern art collector Hermann Rupf in December 1914: “What a misfortune this war is for all of us, and especially for me, as I owe so much to Paris and have such a deep spiritual friendship with the artists there. How will we face one another after all of this will be over? How ashamed will we be about what we have done to one another on both sides! " In his diary Klee established an astonishing connection between the events of the war and abstract art: "The more terrifying this world is (like it is the case today), the more abstract the art, while a happy world produces secularistic art. [..] There is debris in the large form pit, some of which we still feel attached to. That provide the material for abstraction. ”(Quote from Paul Klee, from: Exhibition catalog: Paul Klee. Sammlung Felix Klee, Kestner-Gesellschaft, Hanover 1980, pp. 40/951).For the watercolor “Der Krieg schreitet über eine Ortschaft” this comparison creates a deeply symbolic level. Towards the end of the Tunis watercolors, a series of sheets came into existence, which, beginning with “Mit dem roten x“ (1914, 136), show jumbled abstract architectural elements reminiscent of grids and with titles such as ”Gedanken an die Schlacht“ (Thoughts of Battle, 1914, 140) or “Gedanken an den Aufmarsch“ (Thoughts of Deployment, 1914, 141), titles that clearly evoke military associations. In addition to this motif painted in black on Italian Ingres paper, Klee also used the term ‘war’ for ”Abstrakt Kriegerisch“ (1914, 219) in 1914. In both cases destruction appears, jumbled elements of a peaceful world in abstract signs, man-made order sacrificed to the senselessness of war. Here Klee seems to use the abstract aspect of destruction for his compositional transformation, precisely to decompose a locality into its architectural elements and to reinvent it with the same volume. Terms such as construction, deconstruction, dismantling, dividing, separating are key design principles of Klee's art and this is not necessarily related to the enormous number of works created during the war years. On the contrary: in contrast to Otto Dix, Klee seems to exclude the theme of "war" from his "everyday” drawing life, only readdressing it in 1918 when he was occupied with the "Gedenkblätter für Kriegsgefallene“ (KIA Memorial Sheets), processing the war in his very own critical manner, like it is the case with the watercolor "Mit dem Adler“ from 1918, 155. The Prussian Eagle triumphantly sits on an architectural ground that Klee borrowed from a draft for a national monument, placing an idyllic landscape in the middle. The eye as a symbol of God’s omnipresence watches over good and evil, and here over nature recapturing what was taken by the war. [MvL]
Plus d'informations
+
Vendre
vous souhaitez vendre un objet similaire?
+
Enregistrement sur
Paul Klee
+
Questions sur l´achat
+
Contacter l'expert
208
Paul Klee
Der Krieg schreitet über eine Ortschaft, 1914.
Watercolor on paper, originally laminated on board
Estimation:
€ 100,000 / $ 119,000
Résultat:
€ 200,000 / $ 238.000
(25% frais d'adjudication compris)
Plus d'informations
+
Vendre
vous souhaitez vendre un objet similaire?
+
Enregistrement sur
Paul Klee
+
Questions sur l´achat
+
Contacter l'expert
Autres images 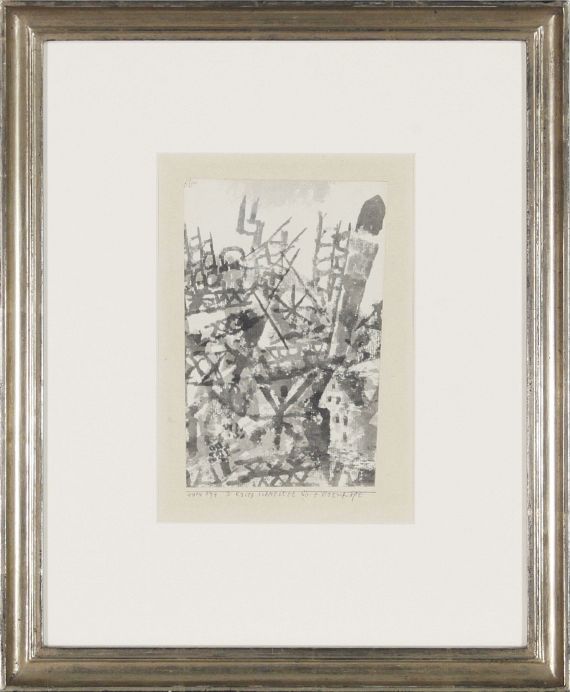 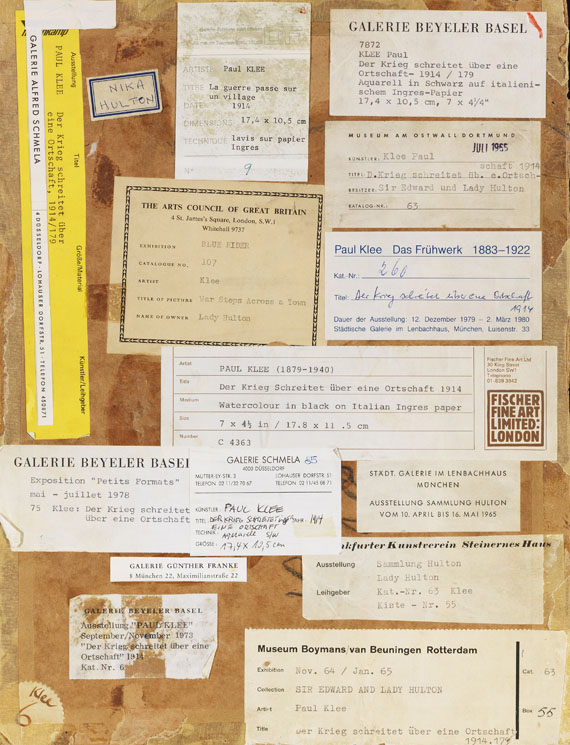 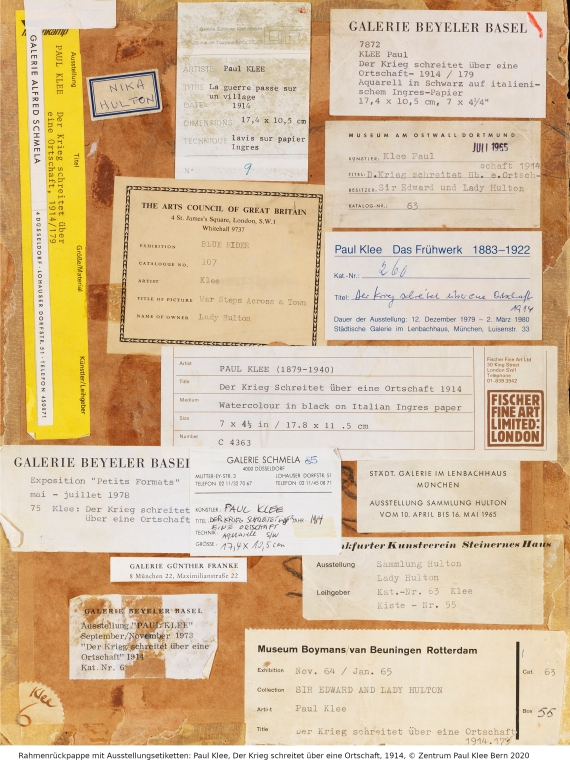