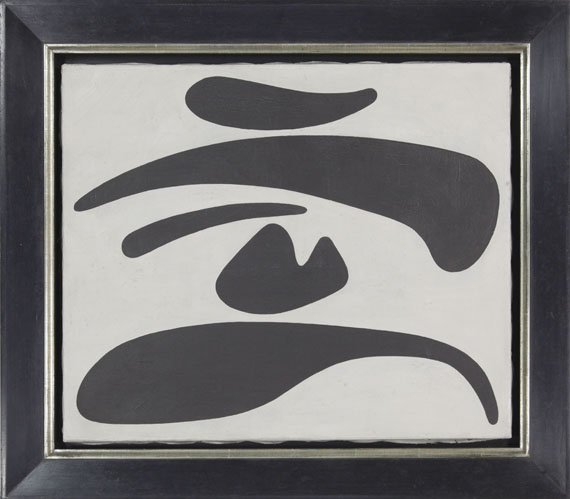 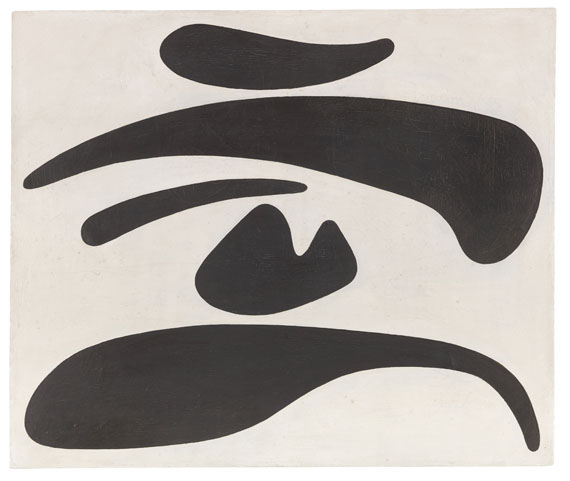 220
Willi Baumeister
Ideogramm I, 1937.
Oil on canvas
Estimation:
€ 40,000 / $ 39,600
Résultat:
€ 275,000 / $ 272,250
( frais d'adjudication compris)
Ideogramm I. 1937.
Oil on canvas.
Beye/Baumeister 750. Signed and dated "Nov. 37" on the stretcher. There also signed on a label and inscribed with the work number "664". 54 x 65 cm (21.2 x 25.5 in).
This presumably is the first painting from the "Ideogramm" series with a total of six parts each showin the motif in a slight variation. This work is the only work from the series documented with the title "Hieroglyphe (Ideogramm)" and illustrated in the artist's journal.
• One of Willi Baumeister's first purely abstract compositions from the early work group "Ideogramme".
• The floating biomorphic structures show parallels to creations by contemporaries like Hans Arp and Alexander Calder.
• On display at the Baumeister retrospective at the Wallraf-Richartz-Museum, Cologne in 1965.
• From the Deutsche Bank Collection.

LITERATURE: Will Grohmann, Willi Baumeister - Leben und Werk, Cologne 1963, cat. no. 473, with illu. (with the title "Ideogramm I").
Galerie Gunzenhauser, catalog 7, Munich 1984/85, p. 18, with illu. on p. 19.
"In no other Baumeister work group than the 'Ideogramme' do the traces of painting appear in such a reduced manner."
Heinz Spielmann/Karin Rhein, Willi Baumeister - Figuren und Zeichen zur Erinnerung an den 50. Todestag des Künstlers, Hamburg 2005, p. 82.

The compositions of the small group of works called "Ideograms", which Baumeister himself referred to as "hieroglyphs" in his notes, are wonderful airy pictures. In perfect floating balance, the black, clearly contoured forms are balanced against one another in a fascinating distance in front of a monochrome background. Nothing disturbs our gaze with which we follow the gently swaying contour. All of this inevitably evokes parallels with Alexander Calder's famous mobiles, with which the American artist also began to experiment around the mid-1930s. "Ideogram I" is one of Baumeister's first consistently abstract creations, which refuse any figurative association not only in terms of form, but also through their titles. Baumeister has a strong affinity for signs, which in the 1940s he once described as the "archetype of the pictorial", as "the first and perhaps the purest position of the optical-visual" (quote from: Beye / Baumeister, vol. I, p . 14). In addition to Calder, the black shapes in Baumeister's impressive composition with their reduced biomorphic formal language also remind us of the contemporary creations of the Franco-German artist Hans Arp. The artists Arp and Baumeister, who were almost the same age, came into contact early on through the Dadaist Kurt Schwitters. Their friendship and artistic exchange presumably commenced in Paris as early as in the 1920s. Finally, encounters of the two artists in the French capital are documented for 1930. In 1938, a year after the creation of the present composition, Arp inspected the works of art Baumeister deposited at the Kunsthalle Basel in 1937/38 in order to protect them from the National Socialists. Mutual studio visits and the exchange of works of art and artistic positions are documented for the post-war period. Baumeister and Arp are also members of the Parisian avant-garde artist group "Abstraction Création", which the American artist Alexander Calder also joined in 1931. The minimalist composition of "Ideogram I" is not only an exceptionally strong composition, but also an impressive artistic document of Baumeister's international artistic exchange in the 1930s. Baumeister, who taught as a professor at the Stuttgart Art Academy from 1946, is one of the most important German avant-garde artists of his time and the pioneering protagonist of Post-War Modernism. Most recently, in 2014, the MKM Museum Küppersmühle, Duisburg, traced Baumeister's career from his days as art student in Stuttgart to a celebrated post-war artist in the comprehensive exhibition "Willi Baumeister International". [JS]
Plus d'informations
+
Vendre
vous souhaitez vendre un objet similaire?
+
Enregistrement sur
Willi Baumeister
+
Questions sur l´achat
+
Contacter l'expert
220
Willi Baumeister
Ideogramm I, 1937.
Oil on canvas
Estimation:
€ 40,000 / $ 39,600
Résultat:
€ 275,000 / $ 272,250
( frais d'adjudication compris)
Plus d'informations
+
Vendre
vous souhaitez vendre un objet similaire?
+
Enregistrement sur
Willi Baumeister
+
Questions sur l´achat
+
Contacter l'expert
Offres sur Willi Baumeister
+
toutes les offres
Ce qui pourrait encore vous intéresser
+
toutes les offres
Willi Baumeister - Objets vendus
+
toutes les offres