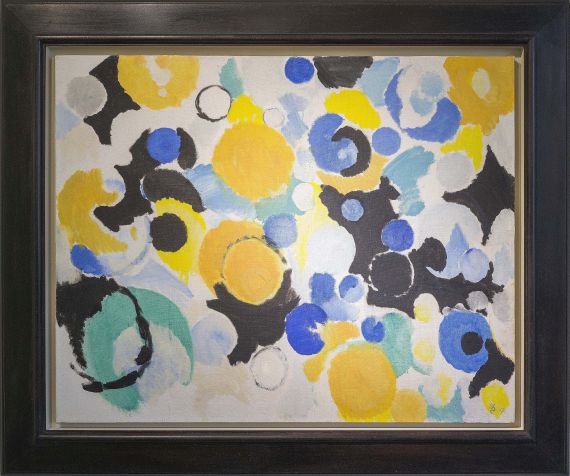 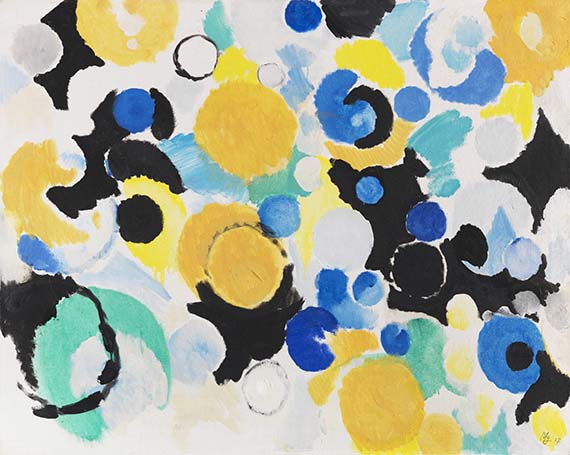 • Offered on the auction market for the first time since 1960.
• From the Deutsche Bank Collection.
• Color composition in an exceptionally subtly moduled rhythm.
• The work was made at the peak of the "Disc Pictures" series: The year it was made Nay showed two "Disc Pictures" in the exhibition "German Art of the Twentieth Century" at the Museum of Modern Art, New York.
• Similar works from this period of creation are at, among others, the Museum Folkwang, Essen (1957), the Bavarian State Painting Collection, Munich (1956), the Nationalgalerie Berlin (1957), and the Kunsthalle Bremen (1957).

The fascination for the disc - Nay's most important work group
The "Scheibenbilder" (Disc Pictures) are the products of one of E. W. Nay's most important and longest lasting work period (1954–1962), as a consequence of which the artist achieved great success both in Germany and abroad. He was soon regarded as "leading master of his generation" (Siegfried Gohr, E. W. Nay. Ein Essay, in: ex. cat. E. W. Nay, Stedelijk Museum, Amsterdam 1998, p. 28). In the beginning Nay combined the discs with graphic design elements, and it was not before 1955 that he used them as sole motif. One day while painting, Nay discovered his fascination for the shape of the circle and the disc. In the process of spreading and distributing the color, he moved the brush across the image carrier in completely natural, circular motions, discovering the form as an artistic inspiration and challenge. From then on he expressed his enthusiasm for the disc in a wide variety of modulations, in which he used unusual, sometimes very light, pastel-like and delicate colors, as well as strong colors.

The color at the center: Strong contrast and subtle harmony
In the work offered here from the late 1950s, Nay used the power of the primary colors yellow and blue and thus created both a light-dark and a warm-cold contrast that adds structures to the entire pictorial space. The employed secondary colors – a strong green and soft orange tones – usually prevent the direct confrontation of the primary colors blue and yellow and emphasize the contrasts even more clearly. A back- or underground visible in just a few places is covered by the sun-yellow, blue-green and sky-blue circular formations and thus harmoniously integrated into the overall composition. No art-historical models, no formal rules or artistic schemes force the color into a certain creative form – in free circles, semicircles and surfaces in varying sizes, as well as in the respective, skillfully chosen positioning, it can speak for itself.
A masterwork of pure abstraction
The works from these years document Nay's successful, new artistic direction on the way to a consistent, pure abstraction and testify to his masterful ability to compose open pictorial spaces with the help of free, intuitive forms and a strong certainty in the choice and combination of harmonious colors. The discs are by no means lifeless forms within a geometric order. They rather create a perceptible rhythm and movement in the picture‘s structure, which is composed so free and unconstrained. Especially the ‘Disc Picture‘ offered here, with its light yellow and strong blue tones that win over the dark gray-black, is a document of Nay‘s great sovereignty in handling color, shape and material, as well as the liveliness and optimistic radiance of works from this creative period, which probably is his most important one. [CH]
Plus d'informations
+
Vendre
vous souhaitez vendre un objet similaire?
+
Enregistrement sur
Ernst Wilhelm Nay
+
Questions sur l´achat
+
Contacter l'expert
223
Ernst Wilhelm Nay
In freien Rhythmen, 1957.
Oil on canvas
Estimation:
€ 150,000 / $ 148,500
Résultat:
€ 575,000 / $ 569,250
( frais d'adjudication compris)
Plus d'informations
+
Vendre
vous souhaitez vendre un objet similaire?
+
Enregistrement sur
Ernst Wilhelm Nay
+
Questions sur l´achat
+
Contacter l'expert
Offres sur Ernst Wilhelm Nay
+
toutes les offres
Ce qui pourrait encore vous intéresser
+
toutes les offres
Ernst Wilhelm Nay - Objets vendus
+
toutes les offres