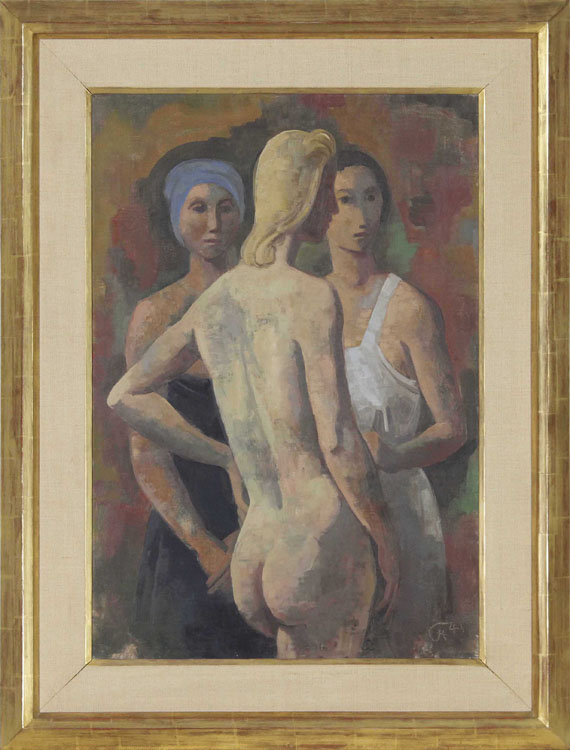 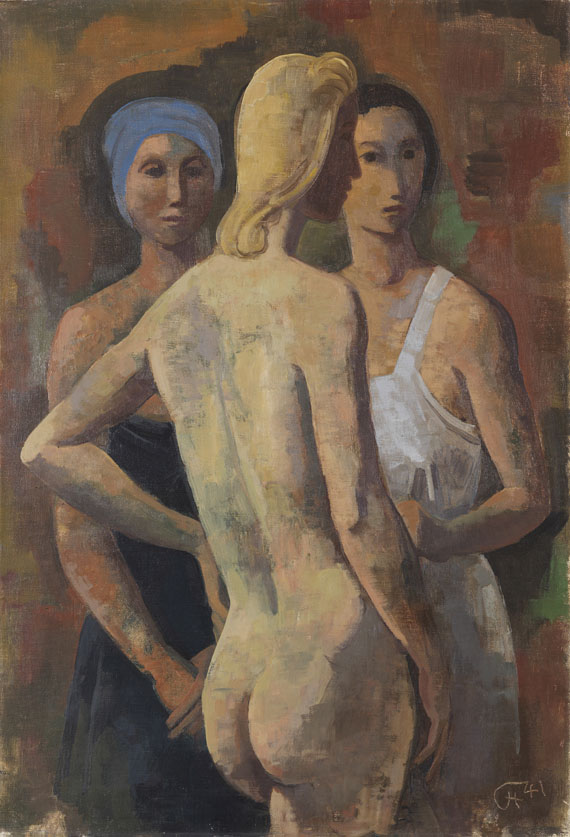 • Hofer's unique portraits of engrossed girl are among the artist's most touching creations.
• In 1957 Hofer's figure paintings were part of the legendary show "German Art of the 20th Century“ at the Museum of Modern Art, New York, alongside works by Dix, Grosz and Beckmann.
• The contrast of black and white dress and the blue of the scarf add subtle tension to the composition.
• Part of a German private collection for 60 years.
• Similar figure compositions from 1943 are in possession of, among others, the Museum der bildenden Künste, Leipzig, and the Karl Ernst Osthaus Museum, Hagen.

LITERATURE: Kunsthaus Lempertz, Cologne, auction 467, December 1/2, 1961, lot 250, p. 47 (with black-and-white illu. on plate 16).
"I never modeled my figuration on the outer nature of chance. That's why Impressionism did not touch me, neither did the ecstasy of Expressionism. Man is the object of my depictions."
Karl Hofer, quote from: Karl Hofer. Von Lebensspuk und stiller Schönheit, ex. cat. Kunsthalle Emden 2012, p. 14.

The melancholy and unrelatedness that characterize Hofer's multi-figure compositions is unique. Groups of three female figures are among the recurring themes in Hofer's oeuvre of paintings. Variations thereof can be found in works from his early creative period. The motif has its iconographic origin in the representations of the "Judgment of Paris" and the "Three Graces" that were quite popular in the era of the Renaissance. At the same time, however, Hofer clearly emancipated himself from these fundamental mythological references. His focus was entirely on the portrayal of an introspective, strangely remote unrelatedness. It is a silent gathering of the three young women, characterized by motionless facial expression and their sentimental, inwardly gaze. At the same time, the latent tension between the three lightly clad women, physically facing each other, is palpable, and is increased by the fascinating contrast of the black and white dress and the opposite nude in rear view. The color accentuation of the light blue headscarf, which once more testifies to Hofer's compositional mastery, is particularly beautiful. The isolation and introversion of the figures is certainly due to Hofer's neo-objective character, but also owed to a sentimental symbol of a generation of artists forced to an ‘internal‘ emigration as a consequence of National Socialist‘s cultural policies. Hofer's protagonists are shown in a moment of pause without action, they are captured in a moment of sensations and feelings that are difficult to determine and also refuse any concrete interpretation due to the artist‘s consistent renunciation of attributes. It is precisely this open formulation that makes for the unique, subtle appeal of Hofer's unmistakable figure compositions. [JS]
Plus d'informations
+
Vendre
vous souhaitez vendre un objet similaire?
+
Enregistrement sur
Karl Hofer
+
Questions sur l´achat
+
Contacter l'expert
312
Karl Hofer
Drei Frauen, 1941.
Oil on canvas
Estimation:
€ 140,000 / $ 162,400
RÃ©sultat:
€ 162,500 / $ 188.500
(25% frais d'adjudication compris)
Plus d'informations
+
Vendre
vous souhaitez vendre un objet similaire?
+
Enregistrement sur
Karl Hofer
+
Questions sur l´achat
+
Contacter l'expert
Offres sur Karl Hofer
+
toutes les offres
Ce qui pourrait encore vous intÃ©resser
+
toutes les offres
Karl Hofer - Objets vendus
+
toutes les offres