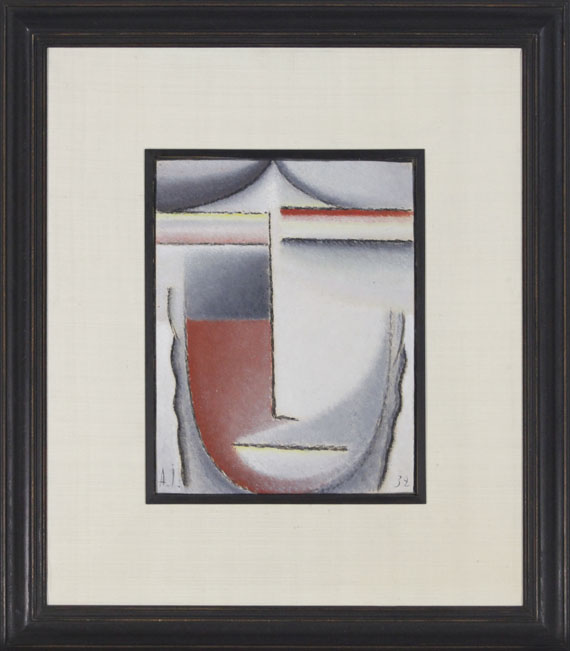 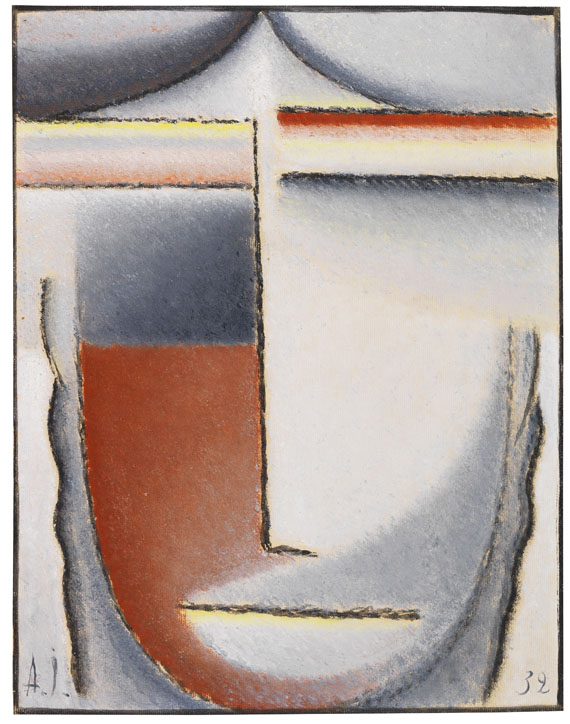 PROVENANCE: Galka Scheyer, Los Angeles, USA (obtained from the artist in 1933; the work is mentioned on the list that Jawlensky sent to Scheyer in 1933).
Estate Galka Scheyer, Los Angeles, USA (1945-1954).
Collection Audrey Lowe Levin, St. Louis, USA (acquired from the estate of the above in September 1954, with an inscription on the reverse).
Collection Sam J. Levin, St. Louis, USA (until 1992, inherited from the above in 1991).
Private collection USA.
Galerie Thomas, Munich (from 2008).
Private collection Berlin.

During these difficult times, which were full of privation, the artist did not only depend on the support of his close friend, the Frankfurt gallery owner Hanna Bekker vom Rath, who had founded the Jawlensky Society, but also on the efforts and sales proceeds generated by Emilie “Emmy“ Esther Scheyer, who mainly lived in America as of 1924, and who Jawlensky later lovingly called "Galka" (Russian: jackdaw) because of her pitch black hair. In 1916 Jawlensky met the Jewish art dealer and collector in Switzerland, where he lived in exile after he had been expelled from Germany. At this point the artist had already been suffering from arthritis, which flared up time and again, for several years. He was immensely restricted by his suffering and at times even bedridden, so that he was living relatively withdrawn in his Wiesbaden apartment. In the light of an increasing xenophobia, he was banned from exhibiting in Germany as of 1933. In the 1930s, which were difficult for both economic and health reasons, the close friendship with Emmy Galka Scheyer turned out to be a real salvation in times of need. Jawlensky wrote to her in 1932, the year the work offered here was created: "I suffer a lot, but I also live - I don't always lie down. I work sitting in my bed. The only thing I have - work. But will, strength, nerves and ecstasy are necessary – but hard to maintain in my condition. But I have will and I love, I love art more than anything. [.] I talk to God, I pray to him in my works. I have very beautiful pictures. Some are works of art. Incredibly strong emanating a secret life. And they are very beautiful. " (Quoted from: Ex. cat. Die Blaue Vier, Kunstmuseum Bern / Kunstsammlung NRW, Düsseldorf, 1997-1998, p. 77).

Because of her passion for modern art, Galka Scheyer worked as an agent for Jawlensky, Lyonel Feininger, Wassily Kandinsky and Paul Klee as of 1924. She tried to establish them on the American art market as an artist group called "The Blue Four". She organized lectures and exhibitions, and between 1925 and 1940 she actually managed to sell a total of almost 60 oil paintings, as well as some watercolors and lithographs by the artists. In 1933 Jawlensky also sent the present work "Abstract Head: Winter Mood" to Scheyer to sell it in America. With its delicate, cool colors that reflect its title, the work, an aesthetically particularly appealing example of the ‘Abstract Heads‘, documents the conscious turn to an ever more consistent abstraction. Accelerated by Jawlensky's illness, the formally much more free and calmer ‘Meditations‘ emerged in the following years. Galka Scheyer was enthusiastic about the art of the "Blue Four", and especially adored Jawlensky's heads: "Jawlensky transposed the human head as such into a language of abstract life, lifted it out of its earthly existence, in order to protect soul and spirit The new laws that he has found are of mathematical nature. He has incorporated the laws of the other arts into his pictures: architecture in the equilibrium of colors, music in the tonal rhythm of colors, dance as a line of colors, sculpting as the form of colors, poetry as content or as the word of the proclamation of colors, but painting itself as a symphonic summary "(quoted from: Clemens Weiler, Alexej Jawlensky, Cologne 1959, p. 106). Jawlensky's fellow artists shared her opinion. Karl Schmidt-Rottluff acquired one, Paul Klee two and Kandinsky also one of the abstract heads for their private collections. [CH]
Plus d'informations
+
Vendre
vous souhaitez vendre un objet similaire?
+
Enregistrement sur
Alexej von Jawlensky
+
Questions sur l´achat
+
Contacter l'expert
229
Alexej von Jawlensky
Winterstimmung (Abstrakter Kopf), 1932.
Oil on structured wove paper, laid on board by ...
Estimation:
€ 240,000 / $ 278,400
RÃ©sultat:
€ 325,000 / $ 377.000
( frais d'adjudication compris)
Plus d'informations
+
Vendre
vous souhaitez vendre un objet similaire?
+
Enregistrement sur
Alexej von Jawlensky
+
Questions sur l´achat
+
Contacter l'expert
Offres sur Alexej von Jawlensky
+
toutes les offres
Ce qui pourrait encore vous intÃ©resser
+
toutes les offres
Alexej von Jawlensky - Objets vendus
+
toutes les offres