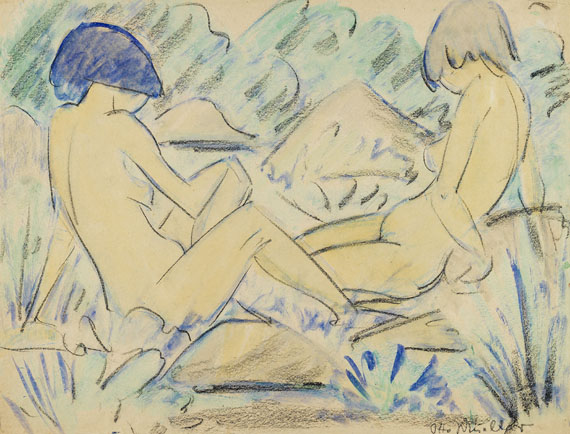 • Characteristic motif in a particularly balanced composition.
• The two seated nudes in consummate movement and grace answer to Otto Mueller's private ideas.
• Despite the simplification of the bodies' depiction, as well as the swift and nervous account of the landscape, the proportion remains the measure of all things.
• The examination of the female body seems to be the artist's key to a fulfilled life as a painter.

LITERATURE: Mario-Andreas von Lüttichau u. Tanja Pirsig, Otto Mueller. Werkverzeicnis der Gemälde und Zeichnungen, Munich 2003 and Essen 2007/08, CD.
"Free and bold is how he [Otto Mueller] places the forms, finally each line swings in space. There is something archaic about his works, like the frescoes of old bygone cultures. Detached from any detail, man majestically stands between Earth and sky .. timeless. He has become a symbol."
Eberhard Troeger, Otto Mueller, Freiburg im Breisgau 1949, p. 28

Otto Mueller made many variations of the "nude in the countryside" between pure figure composition integrated into an outlined dune landscape as it is the case here or in vast landscape sections with isolated trees and bushes. Experiences that Kirchner or Heckel gained on the occasions of their excursions in nature with their at times very young models, the way that the models showed themselves explicitly and sultry in the studio or in the lake landscape, for example in Moritzburg, must have also drawn the interest of Otto Mueller, who was more of a loner, and who correspondingly rendered them in his pictures in a more restrained manner. A certain level of harmony between the close friends, who were enthusiastic about free painting, can be observed especially in works from the years before the First World War, when Kirchner and Mueller spent the summers together on the Baltic Sea island of Fehmarn or in Bohemia, while Mueller and Heckel painted together on Baltic Sea near Kiel after the war at the beginning of the 1920's.

In terms of composition many of these variations are reminiscent of early role models like Hans von Marées or Paul Cézanne. Their concepts became key motifs in painting of the late 19th and early 20th century and led to an intensive examination by many young artists, who dealt with the classic theme of the bathers or the figure in the landscape. In comparison with Marées or Cézanne – it can beassumed – Mueller was looking for an increased simplification of depicting physicality and sought to attain body gestures of the sitting, squatting or standing model that were liberated from academic tradition. However, despite all the simplification in the representation of the body, as well as the fast and nervous account of the landscape, the proportion still remained the the e measure of all things in Mueller‘s compositions. By still clinging to the classic academic teachings, Otto Mueller testifies to the mental kinship with the sculptor and painter Wilhelm Lehmbruck who was also living in Paris. Otto Mueller directly reacted to recent bronzes by the young and emerging sculptor and used the extremely elongated limbs for his painting. In his drawings, watercolors and paintings, Mueller sometimes creats the impression as if nude studies in a landscape, autonomously conceived after sculptures, had been lined up conjointly, or in the sense of Marées, who followed a strict order of the figures in his compositions, staging a coexistence of figures in different poses, creating a contemplative calmness not only through their movements.

Just as he barely gives his models characteristics, apart from perhaps the typical short hairstyles, Otto Mueller‘s landscapes do not provide geographical reference, either. In addition, they are usually just landscape sections that are not that connected to a certain time or place, with perhaps a few exceptions. Single trees, groups of trees, tall grass, reed and bushes surrounding lakes, ponds and creeks, where his 'bathers' frolick feeling unobserved. These are Arcadian landscapes in which naked young girls, occasionally also men, enjoy a carefree life, an earthly paradise on the pristine coasts of North- and Baltic Sea lined by dunes, or between trees and ponds in the sand of the Margraviate of Brandenburg not far from Berlin.