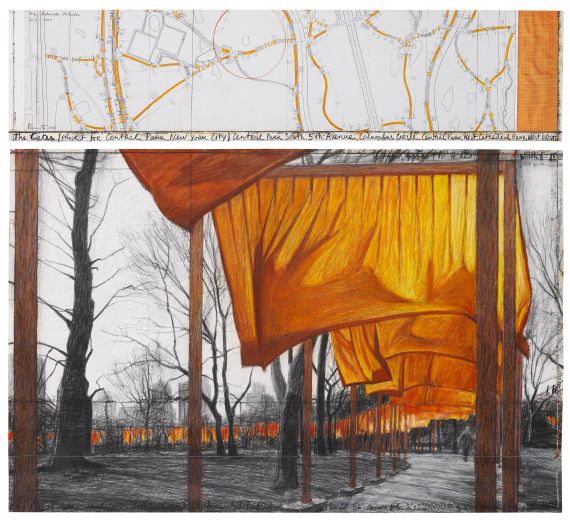 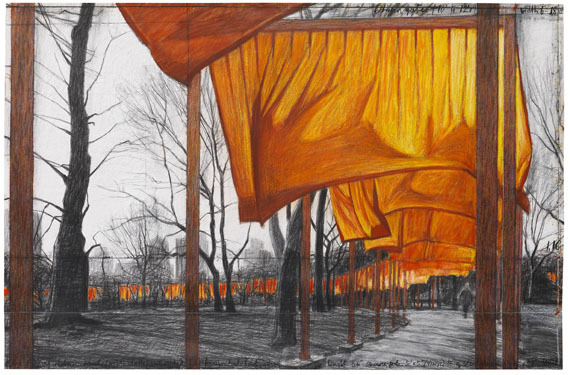 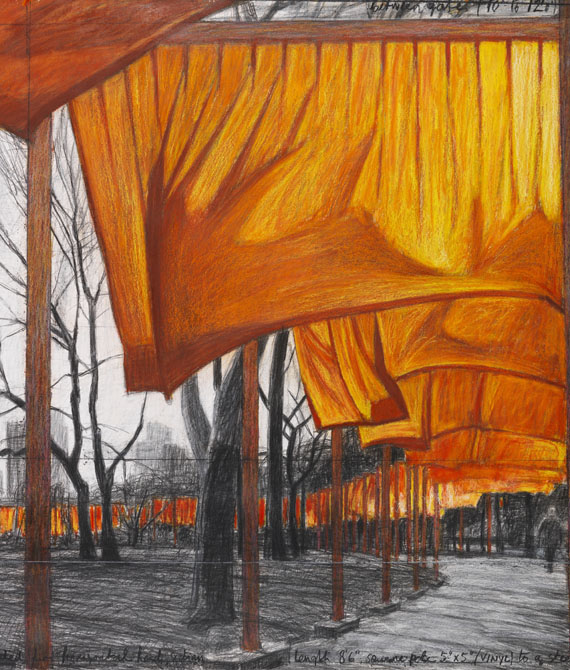 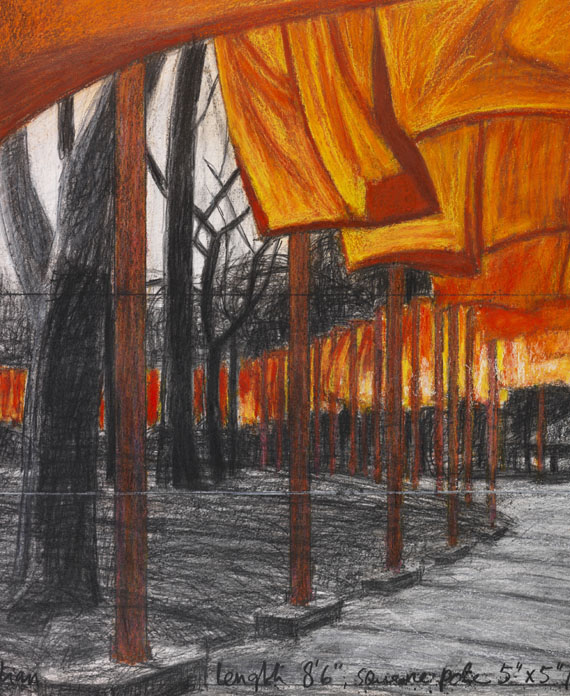 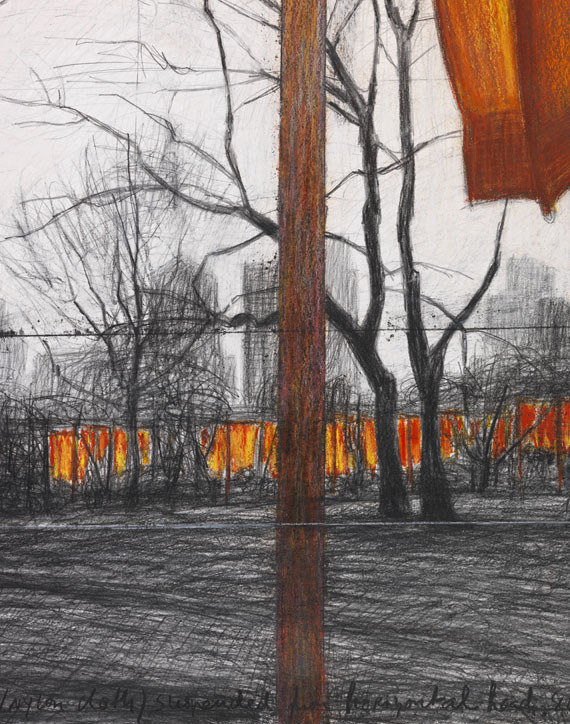 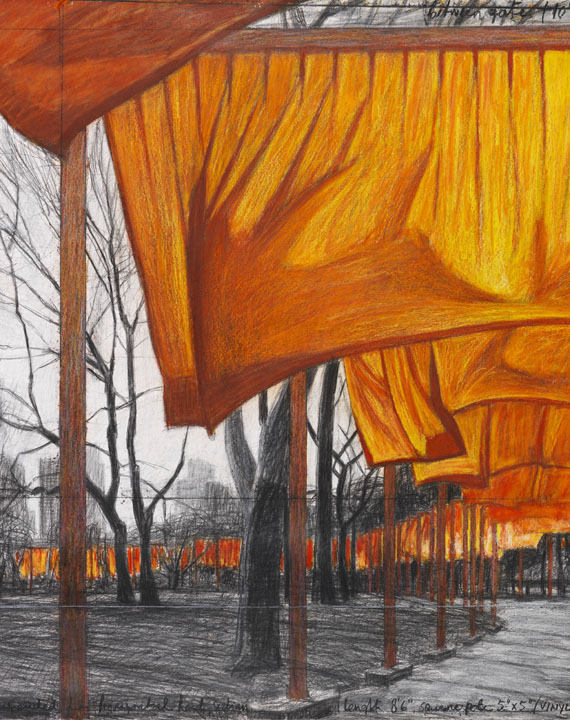 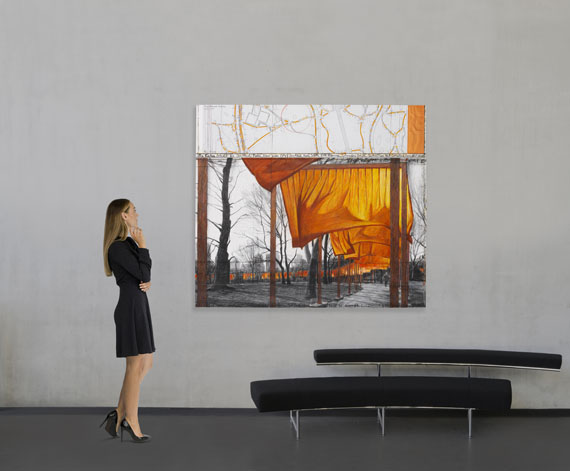 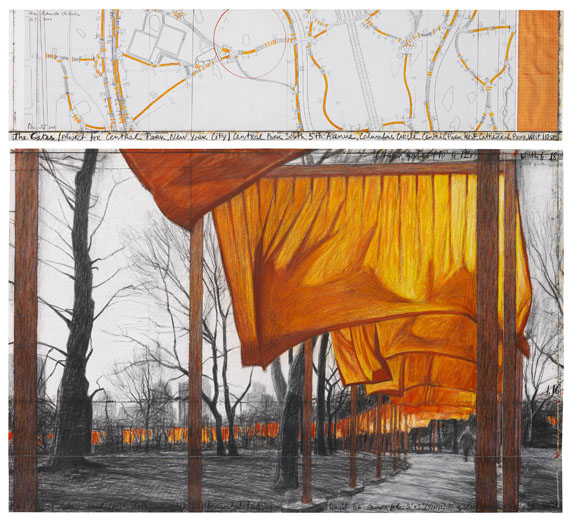 • "The Gates" is one of the main works of the late artist.
• Unsually fine perspective with a strong spatial effect and radiant colors.
• Personally dedicated to the famous Catalan sculptor Eduardo Chillida (1924–2002).
• Next to documenta IV in 1968, Christo participated in 5 other documenta exhibitions, the last time in 2017.

We are grateful to Mr Matthias Koddenberg and Mr Jonathan Henery, Atelier Christo and Jeanne-Claude, New York, for the kind support in cataloging this lot.

Christo, born and raised in Bulgaria, studied painting, sculpture and set design in Sofia from 1952 to 1956. After a short stay in Vienna, he came to Paris in 1958, where, liberated from all constraints, he was able to develop his art unhamperedly. In addition to painting, he began to alienate everyday objects such as cans, chairs, tables and other things by covering them. In Paris he met Jeanne-Claude, who had been living there since 1945, interrupted by a few years in Tunisia. The two first became acquainted when Christo received a portrait commission from Jeanne-Claude's mother. However, they initially had to hide their relationship from her parents. After Christo treated his early veiled objects with glue and sand or paint, he began to leave the fabric untreated and visible around 1960. In 1961, on occasion of his first solo exhibition, he realized the major project "Stacked Oil Drums", oil barrels covered with tarpaulin and tied up in the Cologne Rhine harbor. This was followed by "Rideau de fer" in Paris, an "iron curtain" made of empty, painted oil barrels with which Christo blocked a street. In the coming years, numerous other so-called ‘Environments‘ were created, for example a 5,600 cubic meter package that Christo installed at Documenta 4 in 1968. After this "Air Packaging" and the "Wrapped Tree" in 1966, public buildings like the Kunsthalle Bern or the Museum of Contemporary Art in Philadelphia, were covered, partly also on the inside. From that point on, these wrapping projects were formative for Christo's artistic creation.

The work of art as a process
For Christo and Jeanne-Claude, the period of creation of a project, some of which stretch over decades, is part of their work process. Aesthetic aspects were always more important to them than technical feasibility. In order to maintain independence from sponsors and the public sector, the artist couple financed the projects exclusively with donations and through the sale of the preparatory drawings and collages, which they created in his studio in Soho, where he had been working since 1964. Christo and Jeanne-Claude came to New York at the invitation of Leo Castelli. At first they stayed at the legendary Chelsea Hotel, which, in comparison with their previous homes, was a luxury domicile. They were enthusiastic about New York: "It is the most humane city I have ever lived in. It is also the most cosmopolitan. It is the only modern city of all. It is constantly changing and that is good for creativity." In his studio he moved back and forth between two workplaces, a table for the small-format collages while making the large-format drawings on a wall. Since paint or glue need time to dry, Christo usually worked on several works at a time. Once the works have been completed, he put them in a plexiglass box and took them over to the office, where they were sold to collectors and gallery owners. They generate the revenue for the large-scale projects.

The project "The Gates" had been in planning since 1979 until it was finally put into practice in 2005. In preparation of the major project, the Metropolitan Museum, New York, showed a comprehensive exhibition in 2004. The installation in Central Park consists of 7500 red-framed gates that meander through the park over 37 kilometers, always at a precise distance of 3.65 meters. The saffron-yellow German-made fabric was loosely arched over the gates and allowed to move freely in the wind. The event took place over 16 days in winter, so the leafless branches of the trees would allow the gates and panels to be visible from afar. Depending on the point of view and the light conditions, observers found themselves surrounded by ever new impressions of color and shape. The people of New York continued to use the park as usual. For those strolling through "The Gates", the saffron-colored fabric was like a golden blanket casting warm shadows. From the buildings surrounding Central Park, “The Gates“ looked like a golden river emerging and disappearing through the trees‘ bare branches, emphasizing the shape of the meandering footpaths. The writer David Bourdon summarized Christo's artistic intention as “revelation through concealment”, whereby the new context allows for a new perception of common city- and landscapes. [SM]
Plus d'informations
+
Vendre
vous souhaitez vendre un objet similaire?
+
Enregistrement sur
Christo
+
Questions sur l´achat
+
Contacter l'expert
262
Christo
The Gates, Project for Central Park, NY (2-teilig), 2002.
Mixed media. Oil, pastel chalks, wax chalks, cl...
Estimation:
€ 350,000 / $ 395,500
RÃ©sultat:
€ 745,000 / $ 841.849
( frais d'adjudication compris)
Plus d'informations
+
Vendre
vous souhaitez vendre un objet similaire?
+
Enregistrement sur
Christo
+
Questions sur l´achat
+
Contacter l'expert
Ce qui pourrait encore vous intÃ©resser
+
toutes les offres
Christo - Objets vendus
+
toutes les offres