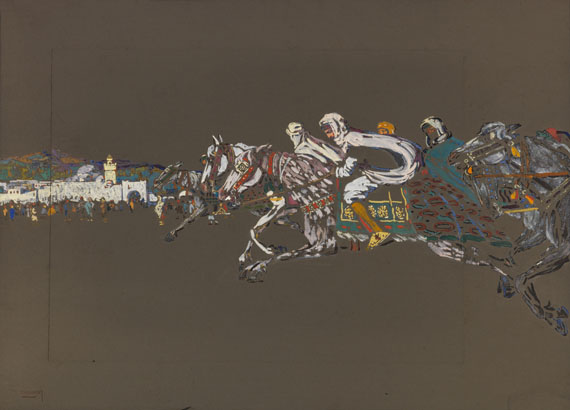 201
Wassily Kandinsky
Reiter (Arabische Reiter), 1905.
Tempera on dark gray board
Estimation:
€ 150,000 / $ 153,000
RÃ©sultat:
€ 225,000 / $ 229.500
( frais d'adjudication compris)
Reiter (Arabische Reiter). 1905.
Tempera on dark gray board.
Barnett 167. Kandinsky Hauskatalog, Farbige Zeichnungen "84, Reiter/Chev. arabes". Bottom left signed. Signed and titled "Reiter" on the reverse, as well as inscribed "No 84". Signed (minimally trimmed) and titled "Arabische Reiter / Chevaliers arabes" as well as inscribed with the techniue "Tempera" on the rear board. There also inscribed "Fantasia" and "No 84" by a hand other than that of the artist. 41.7 x 57.7 cm (16.4 x 22.7 in), size of sheet.
Kandinsky also used this motif for a woodcut of the same name (Roethel 44). [CH].
• This fabulous Arabic scene was inspired by a trip to Tunisisa the artist went on together with Gabriele Münter.
• Impressive early exhibition history.
• Exhibited and published the year it was made some 116 years ago.
• Comparable works are at, among others, the Solomon R. Guggenheim Foundation, New York, the Centre Pompidou, Paris, and the Städtische Galerie im Lenbachhaus, Munich.

Kandinsky always showed great curiosity in all types of artistic techniques and explored artistic processes in addition to palette, brush and canvas. Between 1904 and 1907, as Gabriele Münter reported, he repeatedly experimented with dark cardboard, on which he also tried out "photographic and color-technical experiments" - did Kandinsky simulate an analog method of photography with tempera painting on gray paper? The fact that Kandinsky recognized the diverse possibilities of artistic expression in photography may also have had something to do with his beloved partner Gabriele Münter, whom he met in Munich in spring 1902, and who had already been using this medium intensively during her trip through the USA at the turn of the century. At the beginning of December 1904 ,Kandinsky and Münter set off on a several months long journey to Tunis, from which they only returned to Munich via Italy in April 1905.
Of the many photographs that were taken in Tunis in the winter of 1905, Münter and Kandinsky worked on individual motifs as possible image templates, which Kandinsky also implemented in tempera painting, as it is the case here. A carnival in Tunis that lasted a couple of days at the beginning of March 1905 impressed the two 'tourists' and inspired Kandinsky to do a series of tempera works with "Arab riders" as motif, staging it in front of a remote architectural background on the dark ground of the tinted board. The versatile use of white hightenings creates a colorful, sparkling image with dashing riders wearing white turbans on horses decorated with colorful cloths. Kandinsky was obviously fascinated by the effect of how objects painted in opaque, lighter colors shine out of the dark ground and appear sort of unreal and isolated from their surroundings, and by reversing the light-dark contrast, the depicted world appears more enigmatic and mysterious. A reversal of what is visible on a photographic negative, on which the illuminated surfaces appear dark. By reversing the light-dark contrast, the depicted world appears more enigmatic and mysterious.
Of course, Kandinsky avoids a direct transfer of what he has seen and photographed into his world of images, which here still clearly lives on the decorative, not least in order to achieve a lyrical-symbolist form of expression. In this work Kandinsky also shows his liking of a romantic historicism, as he depicts the riders parading in the photography in a wild horse race outside of town, as it is also the in paintings of horse races by Edgar Degas. For him, the strict theorist he was, it is important to distance himself from reality and to explore the possibility of depicting it in a world of fairy tales.
The "Arab Riders" reached a wide audience the year they were created: Kandinsky sent the picture to the Salon d'Automne in Paris in 1905. In the spring of 1906 the "Arab Riders" were on display in Krefeld, Frankfurt and Karlsruhe and then at gallery Wertheim in Berlin. The "Arab Riders" are also depicted in the famous album "Kandinsky 1901-1913", which Herwarth Walden released through his publishing house "Der Sturm" along with an autobiographical review. He also had the work shown at the art trader Gummesons in Stockholm in 1916. In February and March 1916, Gummesons first showed a Kandinsky and then a Münter exhibition, which he advertised with a joint brochure and which was a great success with the public. [MvL]
Plus d'informations
+
Vendre
vous souhaitez vendre un objet similaire?
+
Enregistrement sur
Wassily Kandinsky
+
Questions sur l´achat
+
Contacter l'expert
201
Wassily Kandinsky
Reiter (Arabische Reiter), 1905.
Tempera on dark gray board
Estimation:
€ 150,000 / $ 153,000
RÃ©sultat:
€ 225,000 / $ 229.500
( frais d'adjudication compris)
Plus d'informations
+
Vendre
vous souhaitez vendre un objet similaire?
+
Enregistrement sur
Wassily Kandinsky
+
Questions sur l´achat
+
Contacter l'expert
Ce qui pourrait encore vous intÃ©resser
+
toutes les offres
Wassily Kandinsky - Objets vendus
+
toutes les offres