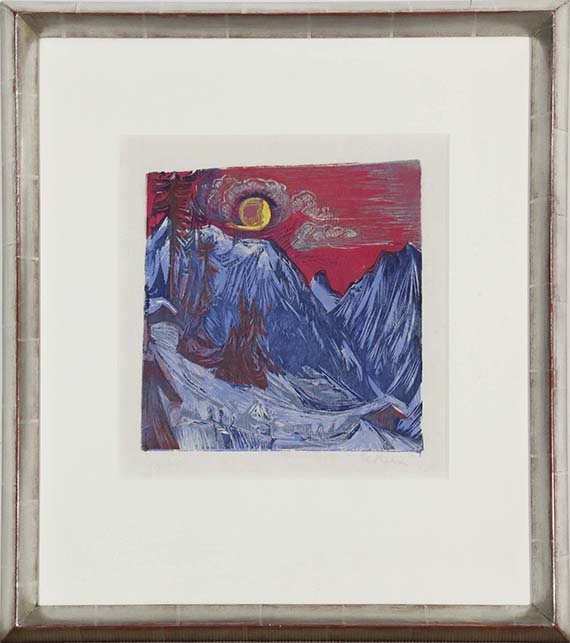 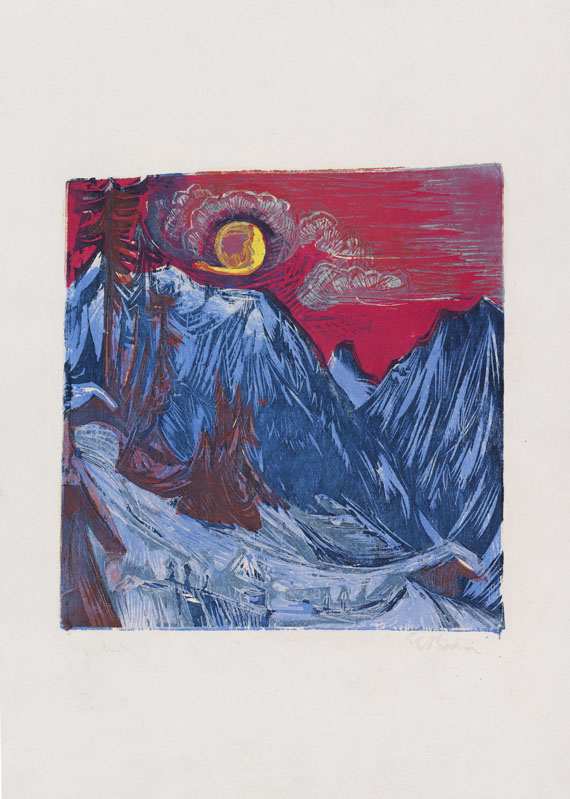 • This is one of the most significant color woodcuts from his period of creation in Switzerland.
• To date only two copies have been offered on the international auction market.
• Of the 12 known copies 6 are in public collections, among them the Kunstmuseum Basel, the Museum of Modern Art in New York, the Städel Museum in Frankfurt am Main and the Museum Folkwang, Essen.
• Of a painting-like effect, the rich colors cover the paper like a relief.
• This woodcut puts Kirchner's idea of the Swiss mountains in a nutshell.

The work is documented at the Ernst Ludwig Kirchner Archive, Wichtrach/Bern.

PROVENANCE: Private collection.
Collection Hermann Gerlinger, Würzburg (with teh collector stamp, acquired from the estate of the above in 1991).

"I saw a marvelous moonset today before sunrise, the mountains were all blue, the sky in a reddish purple with pink clouds and the yellow crescent moon. It was wildly beautiful, but also unbelievably cold. Oh if only that could be painted."
E. L. Kirchner in a letter to Nele van de Velde, January 20, 1919

The third stylistic period of Ernst Ludwig Kirchner began in Switzerland. In 1917, the artist, burdened by his war experiences, first settled in Frauenkirch near Davos. However, he soon left spa town and retreated to the solitude of the mountains. In June and August 1917 he rented a hut on the Stafelalp above Davos. This was where the first drawings and woodcuts of mountain landscapes and motifs from the life of mountain farmers were made. From now on, the direct experience of the mountains should be in the focus of his art. The impression of the Swiss Alps not only led to mental stability for Kirchner, but also to renewed creativity. Switzerland was intended as a short-term refuge, but quickly became his new home and the motor for a new creative period in his oeuvre. A year later he rented the house "In den Lärchen", which he kept as his summer residence. In 1921 his partner Erna Schilling finally moved to Switzerland and in 1923 they both moved into their new house on Wildboden near Frauenkirch. Despite his mental strain and the occasional paralysis, the early days of the time in Davos was extremely productive. Each individual place of life is linked to a large number of works, and the versatility of the media used is astonishing, too: in addition to oil paintings, some of which are quite large, series of woodcuts and etchings, watercolors and drawings up to life-size wooden sculptures were made. Kirchner began to make carvings, making all kinds of pieces of furniture and utensils, carving stools, chairs, bedsteads and bowls, transferring pictorial designs into large wooden reliefs and carpets based on Kirchner’s motifs were also woven.

In January 1919, Kirchner had his printing press transported from Berlin to Davos. He explained Swiss custom authorities that it was a removal items : "The press is used to produce hand prints for woodcuts, it is to facilitate my work in the face of my serious illness." (quoted from ex. cat. Ernst Ludwig Kirchner. Davoser Werke 1917-1923, Kirchner Museum, Davos 1988/1989, p. 88) In the seclusion of the Swiss mountains he began to work on color woodcuts again. The Expressionists made outstanding accomplishments in the medium of the woodcut: they raised this technique, which in the course of the 19th century had almost degenerated into a reproduction technique, to a new artistic level. Like his fellow painters of the "Brücke", Ernst Ludwig Kirchner saw the woodcut as one of the most original graphic techniques, which, due to the brittleness of the wood, is particularly difficult to work with. Kirchner ingeniously used this material deficit in favor of formal expression. In the compression of the formal aspect, he achieved a pictorial expressiveness that was previously not been achieved in this technique. The letter to Nele van de Velde dated January 20, 1919, which is mentioned above, is accompanied by a colored pencil drawing that anticipates the later oil painting (Gordon 558) and the colored woodcut in a mirror-inverted manner. Shortly after the painting was created, the motif was transferred to a colored woodcut in a complex process using several blocks, some of which were divided. By overprinting the individual colors in different nuances and in varying order, twelve unique prints of this motif were created. Some of the colors have been drawn off in such an impasto manner that ridges formed in their edges. The representation is created exactly according to nature. The view goes down the valley from the window on the ground floor of the house "In den Lärchen". Behind the larches on the left you can see the striking backdrop of the Altein, while the Tinzenhorn is at the end of the valley. The magnificent color woodcut "Wintermondnacht" (Winter Moon Night) was born out of the direct experience of nature on a cold, clear winter night. Kirchner translates the spectacle of nature into crystalline, sharp lines with expressive coloring and thus reaches a peak in his graphic work. [SM]
Plus d'informations
+
Vendre
vous souhaitez vendre un objet similaire?
+
Enregistrement sur
Ernst Ludwig Kirchner
+
Questions sur l´achat
+
Contacter l'expert
39
Ernst Ludwig Kirchner
Wintermondnacht – Längmatte bei Monduntergang, 1919.
Woodcut in colors
Estimation:
€ 250,000 / $ 247,500
Résultat:
€ 625,000 / $ 618,750
( frais d'adjudication compris)
Plus d'informations
+
Vendre
vous souhaitez vendre un objet similaire?
+
Enregistrement sur
Ernst Ludwig Kirchner
+
Questions sur l´achat
+
Contacter l'expert
Offres sur Ernst Ludwig Kirchner
+
toutes les offres
Ce qui pourrait encore vous intéresser
+
toutes les offres
Ernst Ludwig Kirchner - Objets vendus
+
toutes les offres