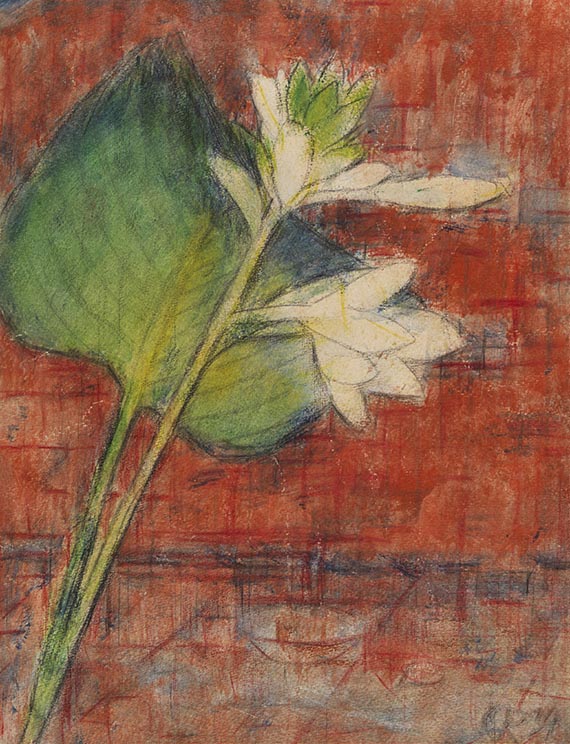 With a written confirmation of authenticty from the Christian Rohlfs Archive at Osthaus Museum Hagen from October 25, 2022. The work will be included into the archive with the number CRA 234/22.

Paul Vogt (1926-2017), longtime director of the Museum Folkwang in Essen and "spiritus rector" of all research on the life and work of Christian Rohlfs‘, estimated in 1988 that the artist’s oeuvre comprises a wealth of more than 2000 watercolors and tempera works. In his today still relevant catalogue raisonné from 1958, he provided proof of 1576 works.

The splendid tempera work fascinates observers in an unusually rich and luminous coloring with a total of sx colors: Leaves and stems in a chromium oxide green, the flowers were additionally accentuated in cadmium yellow, the contours of the sheet-filling plant from the family of the funkia were executed in black pastel chalk. The Mediterranean brick wall in the back that Rohlfs kept in vermilion, creates an appealing color contrast to the floral foreground. On top of that, the dark red bricks add a geometrical structure to the background. Another special feature of the color conception deserves attention. With striking over-paintig in a dark ultra-marine blue on the ground in front of the brick wall and in the sheet’s margins, the 84-year-old artist intentionally referenced the fugaciousness of nature and human existence.

The "Herzblattlilien auf rotem Grund" are an enchanting example of the preferred motifs and the color palette of the artist’s much-celebrated and highly sought-after late work: “The (…) late work of Christian Rohlfs (…) gains its special features from the artist’s first encounter with the southern landscape and light in Ascona on Lago Maggiore.“ (Paul Vogt, Christian Rohlfs, Aquarelle Wassertemperablätter Zeichnungen, Recklinghausen 1988, p. 67)

After a first visit in 1927, Rohlfs rented an apartment in the lakefront Casa Margot in spring1929, where he henceforth lived and worked for around nine months every year. Only a few weeks after he returned to Hagen on December 9,1937, he died in his studio on January 8.

The years from 1933 to 1937 were of existential importance: well advanced in years and at the peak of his success, the artist was sparkling with creativity. In these five years alone, Vogt documents 457 completed tempera works, the majority of which were created on Lago Maggiore. His international breakthrough came with a first exhibition in Paris and a purchase the Louvre made in 1933, as well as with the exhibition at the Detroit Institute of Arts in 1936. The growing political pressure from the arbitrariness and the rigorous claim to power of the Nazi regime, also and especially in the country's cultural life, stood in strong contrast to the unbroken creativity of Christian Rohlfs and his growing international fame and recognition. In 1937, the Nazis confiscated a total of 412 works by Rohlfs from German museums. The artist, like many other Expressionists, was branded as “degenerate” and an exhibition ban was imposed on him.


Among the 57 tempera works painted in 1934, the "Herzblattlilien" occupy a special position. More than half of the creations from this phase show floral motifs. "Flowers remained an (..) important theme, the popularity of which surpassed all other subjects and earned him the reputation of a 'flower painter', although they only make up a part, albeit an important part, of his later work. He painted them in his own garden and in those of his friends, the callas and cannas, the anthuriums and hostas, the chrysanthemums and sunflowers, the gladioli and lotus blossoms, the magnolias and amaryllis, the daturas, hydrangeas, camellias and many others, in summer and autumn as symbols of the enternal cyle of life.” (Paul Vogt, Christian Rohlfs, Leben und Werk, in: C.R. 1849-193, catalog of the exhibitions at the 'Kunsthalle der Hypo-Kulturstiftung' in Munich, March 22 to June 16, 1996 and at the Von der Heydt-Museum Wuppertal June 30 to September 8, 1996, p. 28).

Vogt summed up in 1988: “The result of this light-filled period between 1930 and 1933/34 crowned the late work during these incredibly prolific years (…). Despite all their luminance, his colors had never before possessed such a sensitiveness and a comparable transparency.“ (Vogt, Aquarelle Wassertemperablätter Zeichnungen, ibidem, pp. 75ff.)

Colors, luminance and contours with strong contrasts make the present "Herzblattlilien auf rotem Grund" a tempera work of prime quality. It is to mention in the same breath with another gem from the same year: "Weiße Escheverien in roter Schale" (Vogt 34/45) from the Helene Rohlfs Foundation at Museum Folkwang Essen.

An analyis of the international art market data banks Artprice, Artnet and others for the past couple of years, confirms the singular quality of this offer from the oeuvre of Christian Rohlfs.

The sheet is characterized by immaculate colors in a fresh impression and does not show any traces from a former presentation, verso with traces from the creation in form of different tempera colors by the artist's hand. The work has never been on the market before. Part of a Southern German private collection for two generations, it was bequeathed to the current owner in 1986: Never on display, never on the market before…