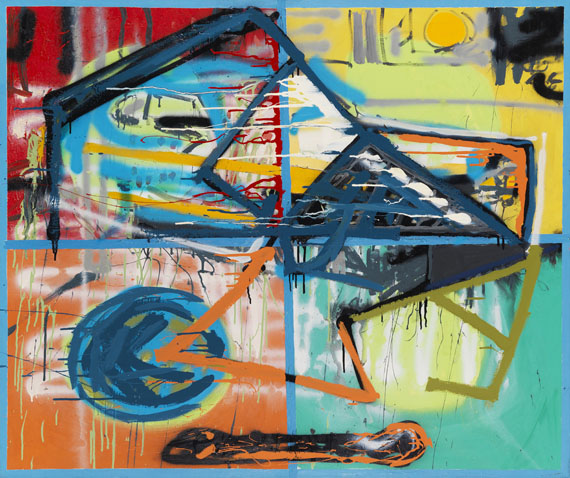 • Kippenberger's provocative nonsense art is a refreshing testimony to the nonconformity of the Berlin art scene in the 1980s.
• Made in context of the legendary action "Capri bei Nacht" a joint event with Albert Oehlen, in which Kippenberger lit up the dark room with the headlights of a painted Ford Capri.
• Ahead of his time and misunderstood by the humorless national art scene, Kippenberger's work was only honored with grand solo shows abroad.
• Only four years after the Museum of Modern Art, New York, the Hamburger Bahnhof, Berlin, honored Kippenberger with the long overdue national solo show "Martin Kippenberger: sehr gut / very good" (2013).
• Since the highest price for a self-portrait from 1988 (16 million euros) was realized in 2014, Kippenberger has become one of the most sought-after German post-war artists on the global market.

With a photo certificate from the Estate of Martin Kippenberger, Berlin, dated November 2022. The work will be included in volume 1 of the catalog raisonné, which is currently being prepared.


"Art finds reflection only in hindsight anyway, [..] not so much when it is made. [..] Then you realize how work and artist actually worked. What people will TELL about me then matters. Whether I was fun or not. And I am working hard on it, so people will say: Kippenberger was fun!"
Martin Kippenberger, quoted from: Kritisches Lexikon der Gegenwartskunst, Munich 1994, p. 14.

Martin Kippenberger, often described as the enfant terrible of the Berlin art scene, was just 44 years old when he died after a life lived restlessly and emotionally. A non-conformist and an intense person in every respect, who could hardly be seen separate from the art, and who had devoted almost all his life to art. For Kippenberger, however, art was always a provocation. Kippenberger's art does not want to be subordinate to the requirements of aesthetic or beauty, and so his sister Susanne wrote aptly: "He wasn't afraid of the white canvas, but of painting beautiful pictures." (S. Kippenberger, Kippenberger. Der Künstler und seine Familie, Berlin 2007, p. 13). Provocative, free and unrestrained, Kippenberger's work could also be described as anti- or nonsense art that broke the boundaries of good taste. Kippenberger provoked and overwhelmed his viewers with a work that alternated between painting, sculpture, installation and happening with a playful nonchalance. He was ahead of his time and in this way exposed the lack of humor on the part of German museum directors, which, according to Zdenek Felix, former director of the Hamburg Deichtorhallen, is partly responsible for the fact that Kippenberger worked at the Center Pompidou in Paris, the Hirshhorn Museum in Washington, had solo exhibitions in the San Francisco Museum of Modern Art and in the Boijmans van Beuningen in Rotterdam, but not in Germany. Accordingly, it is little surprising that the Berliner Tagesspiegel wrote about the opening of the grand Kippenberger retrospective at Hamburger Bahnhof in 2013: “It took a damn long time. Now he has made it to the capital. [..] Or isn’t it the other way around? Berlin has finally managed to include Martin Kippenberger in the canon of art history - 16 years after the early death of the then 44-year-old. The exhibition title 'sehr gut/very good' plays with this ambivalence. The ironic top rating applies to both sides: for the artist, as well as for the Hamburger Bahnhof with its retrospective on occasion Kippenberger's sixtieth [..].” (Martin-Kippenberger-Retrospektive. Jeder Künstler ist ein Mensch, Tagesspiegel February 22, 2013). With its grand American retrospective show "Martin Kippenberger: The Problem Perspective", the Museum of Modern Art in New York preempted the Hamburger Bahnhof in 2009. The fascination for a work characterized by complexity, childish cheekiness and a stunning esprit, is far from over. The fact that Kippenberger lived excessively and was restlessly driven until his early death from cirrhosis of the liver is also reflected in the diversity of contents and media of his art, of which the present painting is a particularly fine example, because it was part of the famous Kippenberger action "Capry bei Nacht“ (Capri at night). The artistic exploration of the Ford model Capri – a popular affordable sports car in the 1970s – was formative for Kippenberger's oeuvre in the 1980s. At first he made the painting "Kein Capri" (No Capri) based on a photograph of the Ford model Taunus in snow with the inscription "Kein Capri" scratched into the snow. This motif was also printed on the invitation card for the exhibition "Capri bei Nacht", which took place in cooperation with Albert Oehlen at Galerie Tanja Grunert in Stuttgart in 1982. Here Kippenberger painted a real Ford Capri with brown paint and oatmeal. As soon as visitors entered the dark exhibition hall, the headlights of the oatmeal car came on, this was "Capri bei Nacht". In the context of this legendary exhibition, paintings of the Capri motif were also created, which – as in the background of the present work – always stage the car diagonally in the picture in different degrees of abstraction, they are considered important testimonies to this legendary action. Unfortunately, however, Kippenberger, whose life and work was one big excess, was no longer able to experience his success: "He wanted to experience it and enjoy it, the success that he felt he deserved. He believed in himself, right from the start, in himself and in his art." (S. Kippenberger, Kippenberger. Der Künstler und seine Familie, Berlin 2007, p. 10). [JS]
Plus d'informations
+
Vendre
vous souhaitez vendre un objet similaire?
+
Enregistrement sur
Martin Kippenberger
+
Questions sur l´achat
+
Contacter l'expert
155
Martin Kippenberger
Ohne Titel, 1982.
Oil and acrylic on canvas, partly sprayed
Estimation:
€ 90,000 / $ 84,600
Résultat:
€ 212,500 / $ 199,750
( frais d'adjudication compris)
Plus d'informations
+
Vendre
vous souhaitez vendre un objet similaire?
+
Enregistrement sur
Martin Kippenberger
+
Questions sur l´achat
+
Contacter l'expert
Ce qui pourrait encore vous intéresser
+
toutes les offres
Martin Kippenberger - Objets vendus
+
toutes les offres